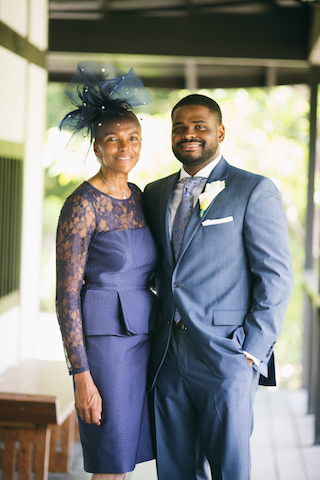 Dr. Madlene Sawyer and her son, Miles Sawyer-Hill enjoy a special mother-son bond as both enjoy careers in the medical field. Miles was his Mom’s “Mother’s Day Gift’ many years ago when he was born just two days before Mother’s Day. She has a busy practice in Nassau while son Miles, now a father of two himself, manages regional marketing and advertising for Cleveland Clinic Florida.

This Sunday when moms around the world are treated to over-the-top luxurious brunches or breakfast in bed prepared by hubby and little ones, one mother and son will likely be clinking coffee cups and sharing their own special moments, reminiscing over the good old days in one of the most unlikely places of all – the halls of hospitals.

Dr. Madlene Sawyer, respected OBYGN, perinatologist and endoscopist in Nassau, Bahamas, and her son, Miles Sawyer-Hill, regional manager for marketing and advertising for Cleveland Clinic Florida share a bond that goes back to the beginning and wends its way through four hospitals in two countries, though never because either was ill.

“Miles Gordon was my Mother’s Day present, born on the Friday evening before Mother’s Day,” said Dr. Sawyer. “He was the best Mother’s Day present ever.” Dr. Sawyer was working at Miami’s Jackson Memorial Hospital, part of the university health system, as Assistant Professor with responsibility as a Medical Director when Miles was born.

“He practically grew up in the hospital environment,” she said. Dr. Sawyer decided to return to her native Bahamas, bringing her family and infant son with her. She practiced first in Grand Bahama serving in a much-needed capacity at Rand Memorial Hospital, again, young Miles shadowed her. Medical conferences, he was there. Late night emergency deliveries, he was by her side. He cannot remember a time when he did not trail his mum as she made the rounds, visited patients, conferred with other doctors. Later in 1991, she would move back to Nassau, practicing with both the Public Hospitals Authority and the private facility, Doctors Hospital.

“I’m very blessed,” he says, “to have such a great mum with whom I have a close relationship built on mutual love, admiration and respect.” He also credits being raised in the Bahamas and its influence on him as an adult. “I’m proud to be a Bahamian and it has help mold me into the man and professional I am today,” Sawyer-Hill said.

It was so natural for a young or teen Miles to speak the language of medicine and so comfortable to be around the dynamic, often breathless life-and-death world of doctors, hospital staff and technicians that most friends assumed he, too, would become a doctor.

““When I was younger, I considered medicine and at first was interested in studying anesthesiology, but as I got older, I became drawn to advertising and which I was exposed to by my father. It was the ideal combination, it inherently felt right,” he said.

With a dual degree in Advertising and International Marketing from the University of Florida in hand, and a job opportunity at Cleveland Clinic Florida, Miles knew he was following the right path, combining his knowledge of the world of medicine with his passion for creative and brand development.

“Cleveland Clinic is a leading global healthcare system offering world class care throughout the world – my position with the organization has exposed me to amazing experiences, fruitful partnerships and helped to make me a leader in my community,” Sawyer-Hill said, now married with two children of his own, ages 2 and 3.

As for Mother’s Day, wherever they choose to celebrate, the language of medicine between the son who boasts, “My mother, the doctor,” and the mother who proudly says, “My son, the medical marketer,” will be one of a kind shared by two, a celebration of two lives along parallel paths paved with admiration.