It takes roughly five minutes and some prompting for the American kestrel – a small, colorful falcon –to realize its free.

Discovered two weeks ago flapping around on the ground, a do-gooder brought the young bird to Ardastra Gardens, Zoo & Conservation Centre believing it to be lacking the flight and survival skills that it would have been taught by its parents had it not fallen from its nest.

“Ideally you want these birds to stay in their natural ecosystem. Not all of them are going to survive but that’s part of nature. We want to let nature do the picking and choosing as much as possible,” said Bonnie Young, Ardastra’s animal curator.

Of the fourteen kestrels the centre took in this month, three have become permanent residents, four have been released and the rest are receiving care. If history repeats itself, up next will be an influx of mockingbirds and flycatchers, followed by white-crowned pigeons, a species classified as “near threatened” by The International Union for Conservation of Nature (IUCN).

Spring brings new life and with it a busy season for animal rescue and rehabilitation at Ardastra, reinforcing the conservation mandate that is a part of its name. Its highly trained staff is largely called upon to rescue snakes and birds.

Just that morning Ms Young undertook a catch and release of a five-foot Bahamian boa constrictor which had somehow entered a home on Prospect Ridge and tangled itself up underneath a bathroom sink.

She keeps a pillowcase in her car for that very purpose. Tie the end and it’s a nifty container for transporting unwanted, reptilian intruders away from civilization to uninhabited and undisclosed locations.

Originally opened as a botanical garden in 1937, the late Norman Solomon added the zoological aspect to Ardastra when he purchased the property in the early 1980s.

Known the world over for its synchronized marching pink flamingos, Ardastra’s work with distressed wildlife has not been as widely publicized, until recently.

In 2017, the centre took in 79 rescue animals. Last year that number skyrocketed to 120, not counting pet turtles.

Inexpensive, seemingly low maintenance and cute, fitting in the palm of your hands, people have been buying up baby red-eared sliders not realizing they will grow to roughly the size of a dinner plate and quickly outgrow a 20-gallon tank. More importantly, they have a very long lifespan.

“In the last two days we have taken in three turtles. We try to do a lot of education on responsible pet ownership and that starts with choosing the right pet for you and being able to commit to caring for that animal and meeting its needs for its lifespan,” said Ms Young.

“That means knowing that your little turtle is going to grow fairly rapidly over the first five to 10 years, it’s going to live potentially 30 to 40 years and it’s going to need more space.”

To make matters worse, the red-eared slider is not a native species. It can, however, interbreed with several related native species of slider, creating hybrids that dilute the genetics of native turtle populations.

“We never recommend that a pet is ever released into the wild. It’s not fair to the animal and it’s also potentially damaging to the ecosystem,” said Ms Young.

Ardastra “easily” has 300 turtles in its ponds. A few turtle parents might leave a little food for their former pet, the majority do not.

Ardastra lacks the resources and funds to take on every animal in need. The expense associated with caring for each temporary boarder varies. In general, it costs a minimum $5 per day to feed and care for them. The price goes up if the animal requires medication and ongoing veterinary care.

A single vet visit ranges from $15-$80 per animal, x-rays cost $25, if necessary. Some animals could require specialized food or round the clock care.

Although it’s a costly undertaking, Ardastra pays out of pocket for all animals in its care including food and veterinary services for temporary boarders recovering from injuries, waiting to be released back into the wild.

Even if the conservation centre could save every animal in peril, doing so could disrupt the function of natural ecosystems and survival of the fittest, unintentionally bringing about the flourishing of the weak and vulnerable.

“Our first option always is to hopefully get these animals back into the wild. We don’t always wish to keep them. Unfortunately, once they imprint it’s very difficult to do that. They lose that fear of humans,” said Hendrew Haley, Ardastra’s senior zookeeper.

“They will start to associate humans with food and that could lead to them endangering themselves by approaching humans for food or getting aggressive when they don’t receive it and potentially attacking humans.”

Consequently, when these wildlife rehabilitators receive rescue calls, they try to stay as hands off as possible.

Post examination, rescued animals are kept isolated, away from human traffic, in partially covered cages so they won’t realize human hands are behind the tongs extending food at feeding time. The goal is to prevent them recognizing and relying upon human interference.

Still, the outlook for wildlife preservation is bleak. Of the 120 rescues which took place in 2018, for many discovery and intervention came too late. Only 34 animals were able to be returned to their natural habitat. Some found a permanent home at Ardastra.

Soren was rescued from the Wyndham Crystal Palace Resort just before it was imploded last October. She was 20 days old at the time and required round the clock care.

“Of course, she imprinted very quickly so we started to work with her to train her up. Now she is an ambassador for the zoo. She has done about two school visits,” said Mr Haley, her trainer.

Over a month old at the time of his rescue, Grumpus came to Ardastra Gardens shortly after Soren. He was named for his less than pleasant demeanor during those early days at the facility.

The dilemma of whether to intervene is a tough call to make when an animal is injured or orphaned.

“When a bird is fledging [growing feathers big enough for flying] it’s going to end up out of the nest, maybe on the floor, but that’s a natural process in learning how to fly. They do have the ability to call, so their parents can find them and bring them food,” explained Mr Haley.

“Eventually they can develop the strength to get up back into the nest or be close by where they can be safe. Once people see birds on the floor their first thought is to pick it up and try to save it. Sometimes that’s not always the best call. They have a higher chance of survival if they stay around their parents and go through this natural process. It’s hard to make that judgement call.”

In the case of the newly released American kestrel who took his cue from another bird’s takeoff before his own haphazard launch and rusty landing in a nearby tree, one could only hope human intervention did much more than buy a little time.

“Do well,” says Ms Young as she packs up the cage and leaves the park. “Hopefully, we won’t see you again.”

Support Ardastra’s work in one of three ways: become a member, donate, or adopt/sponsor an animal. 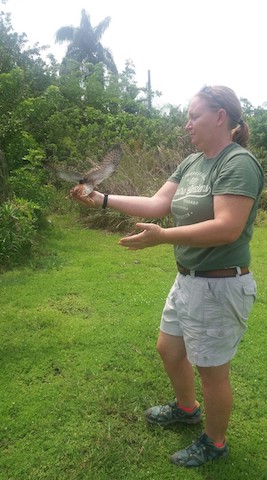 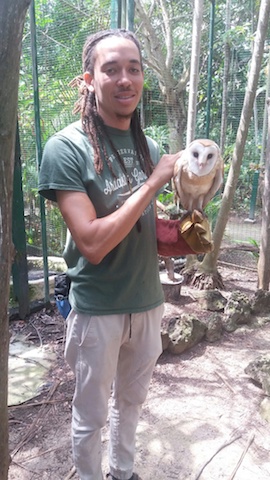