The Bahamas National Trust (BNT) held its Annual General Meeting (AGM) and Spring Council meetings commemorating the 60th anniversary of the organization, also electing its new Council and Officers for the year and reviewed current issues and work being done by the Trust.

The BNT membership elected fifteen members to serve on the twenty-nine-member council; another fourteen members are appointed, representing government and major scientific organizations and universities.

The newly elected BNT Council is charged with the responsibility of giving direction for the Bahamas National Trust. On Saturday the Council participated in special Board Training Exercise facilitated by Katha Kissman of BoardSource. BoardSource is a national organization working to strengthen nonprofit board leadership.

The AGM also provided an opportunity for the BNT to recognize outstanding support from individuals and corporate Bahamas.

This year the BNT recognized two outstanding volunteer initiatives for their contribution to the Exuma Cays Land and Sea Park: The Bahamas Poker Run and the Silver Fox Fishing Tournament.

“I would like at this time to commend the BNT’s hardworking staff who give many unpaid hours to the national park system of The Bahamas,” said Her Excellency Dame Marguerite Pindling, Governor General of the Bahamas, who gave an overview of the BNT’s work for the year highlighting major accomplishments in all of the national parks in The Bahamas, especially the Exuma Cays Land and Sea Park for winning the Global Ocean Refuge (Glores) Award, an award only given to marine protected areas (MPAs) that meet the highest science based standards for biodiversity protection and best practices for management and enforcement.

A special guest speaker was also a part of this year’s AGM. Dr. G. Carleton Ray, founding member of the Bahamas National Trust spoke on the project he started from the 1950’s which included the importance of identifying and protecting National Park Systems in the Bahamas.

He also addressed the importance of saving the lives of the species Bahamians love so much namely the conch and grouper.

Dr. Ray was recently recognized for half a century of environmental work by being awarded the inaugural NOGI Award by the Academy of Underwater Arts and Sciences.

“Support from our corporate partners is essential for the success of our events and programmes.

We are extremely grateful for the support provided by these very special corporate citizens” said Janet Johnson, outgoing President of the BNT.

In closing, she thanked staff, members and Council for all of their hard work and support during her Presidency and pledged to continue to support the work of the BNT. 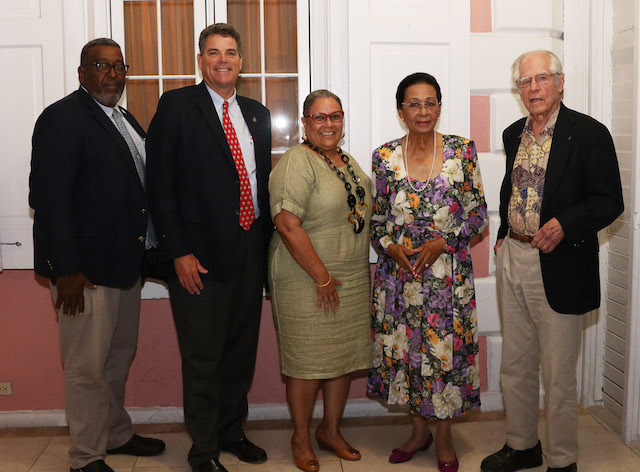