Prime Minister, the Most Hon. Dr. Hubert Minnis says that one of his administration’s key priorities is that 30 percent of the country’s total electricity matrix should be comprised of renewable sources by 2030.

The 30 percent renewable energy target by 2030 is an international commitment made by The Bahamas as a party to the 2015 United Nations Paris Agreement on Climate Change.

The Prime Minister’s remarks came during groundbreaking ceremonies for Grand Bahama Power’s Solar Sunrise Solar Plant, in Freeport, Friday, February 22, 2019. The plant is the first of its kind in The Bahamas and will sit on 15 acres of industrial land, featuring 11,500 photo voltaic panels, with the ability to cut CO2 emissions by 4,200 tons.

The plant will have the capacity to generate enough electricity to support over 850 homes. The solar plant represents over $2 million direct investment in the local economy.

In his keynote address during the groundbreaking ceremonies, Prime Minister Minnis noted that energy sector reform and the expansion of renewable energy sources are vital for economic growth and expansion, and sustainable development.

He outlined his Administration’s energy sector reform, which includes:

* The use of the country’s renewable resources to reduce our carbon footprint; and

“Today’s groundbreaking is a relatively small, but important step in the right direction for Grand Bahama and The Bahamas,” said Prime Minister Minnis.

“Solar Sunrise is the first utility scale solar plant in the country.

“It will have a total installed capacity of 3.3 megawatts, capable of supplying enough electricity to support over 850 homes on Grand Bahama. The project represents an over $2 million direct investment in the local economy. It is a physical hedge against volatile oil prices.

“This is very good news, given the ongoing fluctuation in global oil prices and the resulting rate volatility.”

Even better news, the Prime Minister noted, is the commitment made by GBPC to invest more than $18 million in renewable energy and smart technology over the next three years in order to improve reliability and to lower energy costs.

“I have been informed that the company has also already completed studies that show that almost 60 megawatts of renewable energy sources – a mix of distributed and centralized – may be safely incorporated into GBPC’s grid,” Prime Minister Minnis pointed out.

“This would account for 30 percent of current energy production in Grand Bahama.”

The Prime Minister added that his administration is making strides in energy sector reform and the greater utilization of renewable energy.

In this effort, he announced that a 390-kilowatt solar micro-grid should be installed in Ragged Island by the end of the year -- a critical step in the redevelopment of Ragged Island.

Dr. Minnis said that the Government has introduced additional tax incentives for solar equipment and plans are advancing to retrofit public schools and buildings on New Providence on an ongoing basis.

“We hope to complete energy audits for an additional eight government buildings in the next few months, including the Cecil Wallace Whitfield Centre in New Providence, which houses the Office of the Prime Minister and the Ministry of Finance,” the Prime Minister said.

“We want to refine the scope of works in order to begin tendering procedures for retrofitting and installing a combined 1 megawatt of solar PV at these buildings by 2020.

“The approximately 1 megawatt solar car park canopy at the National Stadium should become operational at the end of March.”

The Prime Minister said he has pressed on Bahamas Power and Light (BPL) the urgency to further develop and to begin implementing its strategy for renewable energy utility generation in the Family Islands.

He said there are approximately 80 customers with solar PV systems tied to BPL’s grid, mostly on New Providence, but also on Eleuthera and Exuma, representing approximately two megawatts in installed renewable energy capacity.

“However, we know that there are systems in the country that are not yet registered.

“BPL has committed to conducting the necessary public awareness campaigns and registration drives to enable us to have better data on residential and commercial solar PV and other renewable energy systems.

“I encourage GBPC to do the same.”

Re-emphasizing his government’s goal of having 30 percent of the country’s total electricity matrix comprised of renewable sources by 2030, the Prime Minister pointed out that it is a national target.

Achieving this target, he said, will depend on all Bahamians, including: individuals, families and communities, as well as businesses, government and the non-profit and social sector.

“Although alternative and renewable energy technologies are becoming cost-competitive and better understood globally and in The Bahamas, we still have a very long way to go as a country,” Dr. Minnis said.

“My office has been liaising with and bringing together key energy stakeholders over the past months to agree on how we should measure our progress to achieve the 30 percent target by 2030.

“GBPC should be a part of these discussions moving forward so that we can learn more of the company’s plans for incorporating renewables over the next few years.” 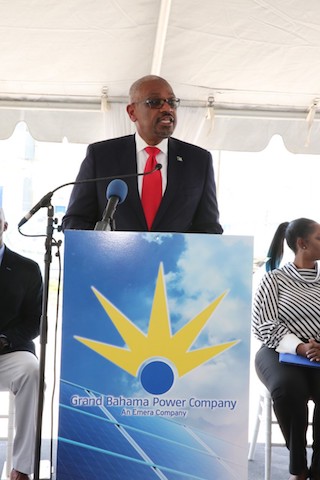 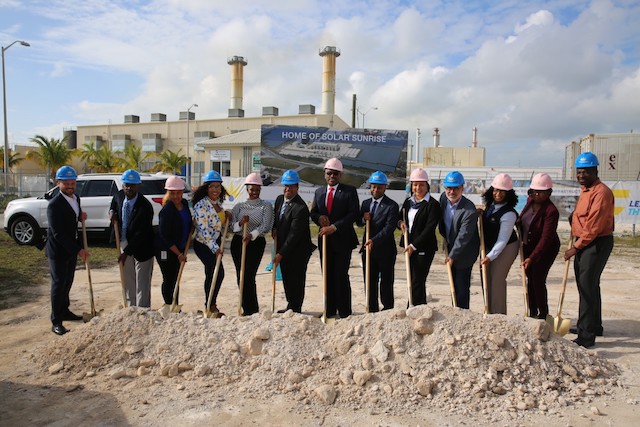 READY TO BREAK GROUND – Prime Minister, the Most Honorable Dr. Hubert Minnis (center) was joined by other Cabinet colleagues and executives of Grand Bahama Power and the Grand Bahama Port Authority for groundbreaking ceremonies for the proposed construction of the country’s first solar power plant in Grand Bahama on Friday, February 22, 2019. Also joining in the official groundbreaking were Deputy Prime Minister and Minister of Finance, the Hon. Peter Turnquest (sixth from left) and Minister of State for Grand Bahama, Senator the Hon. Kwasi Thompson (sixth from right). 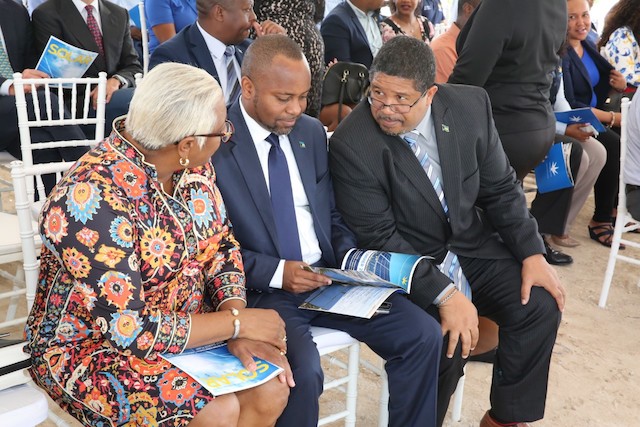 LOOKING AT PLANS – Deputy Prime Minister and Minister of Finance, the Hon. Peter Turnquest (right), Minister of State for Grand Bahama, Senator the Hon. Kwasi Thompson (centre), and President of the Senate, Senator the Hon. Kay Forbes-Smith look at the perspectives for the proposed Solar Sunrise solar energy plant, set to be built in Freeport in the coming months, following groundbreaking ceremonies on Friday, February 22, 2019. BIS Photos/Andrew Miller