Royal Caribbean Cruises Ltd. (NYSE: RCL) During a ceremony aboard the world’s largest cruise ship, Symphony of the Seas, while docked in the Nassau harbour, two recent graduates of the Lowell Jason Mortimer (LJM) Maritime Academy received full-tuition scholarships to the Caribbean Maritime University (CMU) through a pledge by Royal Caribbean International (RCI) and the American Caribbean Maritime Foundation.

”With our relationship and partnership with the wider Caribbean and specifically with The Bahamas, we see that we need to make significant investments to also make The Bahamas and Caribbean a part of that future picture.

Part of the 12-student cohort and first graduating class of the LJM Maritime Academy, the two recipients, Shante Pearson and Tre´von Ferguson were freshly dressed in their uniform whites and smiled as they accepted their scholarships as their parents and well-wishers looked on during the presentation.

The students completed a three-year diploma programme at the Academy with one of the requirements being a year at sea.

They will now attend CMU in Port Royal, Kingston Jamaica for another two years to complete a Bachelors degree in Maritime Transportation.

The American Caribbean Maritime Foundation, headed by President and Executive Director Dr. Geneive Brown Metzger, exists to support the work of the Caribbean Maritime University with activities focused on raising funds for scholarships, equipment, facilities and infrastructure, including classrooms, physical amenities and to support the development of the maritime community in which the University is located.

The scholarship is the first two of six that will be made available by ACMF.

“We couldn’t have a better partner than Royal. They get the strategic importance of educating the next generation of Caribbean mariners,” said Dr. Metzger.

“Thanks also to the American Caribbean Maritime Foundation. They were the ones who actually contacted us initially to make sure that our students could do this and we are thankful and grateful to them.

Our students, although they are the first two, they are the ambassadors of LJM Maritime to CMU and we know that they will shine.”

Shante Ferguson, scholarship recipient, shared what the scholarship meant to her and where her inspiration for the sea grew from.

“My father, he is a product of the Royal Bahamas Defence Force. I was always on boats. From then I said that I wanted to have a career on the sea, “she said. “This scholarship means a lot.

It’s an opportunity for me to finish my career and make it to my ultimate goal which is to be a captain of a cruise ship.”

Tre’von Ferguson recalled an early attraction to the sea instilled in him by his late uncle who was a fisherman and longingly looking out at ships pulling in an out of the Grand Bahama Container Port whenever he would accompany his mother to her office.

“I am ecstatic for the opportunity,” said Ferguson who got a chance to perch in the captain’s chair during a behind the scenes tour of the ship.

“I sat in the captain’s chair where I felt tremendous pressure but I’m actually looking forward to feeling that pressure someday.”

Dr. Fritz Pinnock, President Caribbean Maritime University shared the impact of relationships between the entities present that will go a long way to assist in increasing employment of people in the Caribbean.

“The Caribbean host[s] almost 40% of the world’s cruise deployment and yet less than 7% of employment,” he said.

“So I’m really happy for this opportunity with Royal Caribbean because it now gives an amazing opportunity for Caribbean people to be moving up to the levels of captains and chief engineers.”

“One thing we are most proud of at Royal Caribbean is our ability to award scholarships,” said Purdy.

“We award scholarships to both LJM Maritime Academy and to CMU and we’d like to thank them both for their partnership.

I’m thrilled to be here again to continue supporting maritime efforts. What we are supporting here is job growth in the Caribbean and in The Bahamas.”

ABOUT ROYAL CARIBBEAN INTERNATIONAL
Royal Caribbean International is an award-winning global cruise brand with a 49-year legacy of innovation and introducing industry “firsts” never before seen at sea. The cruise line features an expansive and unmatched array of features and amenities only found on Royal Caribbean, including jaw-dropping, state-of-the-art entertainment and industry-acclaimed programming that appeals to families and adventurous vacationers alike. Onboard, guests are catered to with the cruise line’s world-renowned friendly and engaging service by each and every staff and crew member. Royal Caribbean has been voted “Best Cruise Line Overall” for 16 consecutive years in the Travel Weekly Readers’ Choice Awards.

The cruise line sails 25 of the world’s most innovative cruise ships to the most popular destinations in Bermuda and the Caribbean, Europe, Canada and New England, Alaska, South America, Asia, and Australia and New Zealand. Media can stay up-to-date by following @RoyalCaribPR on Twitter and visiting RoyalCaribbeanPressCenter.com. For additional information or to make reservations, vacationers should call their travel agent; visit RoyalCaribbean.com; or call (800) ROYAL-CARIBBEAN. 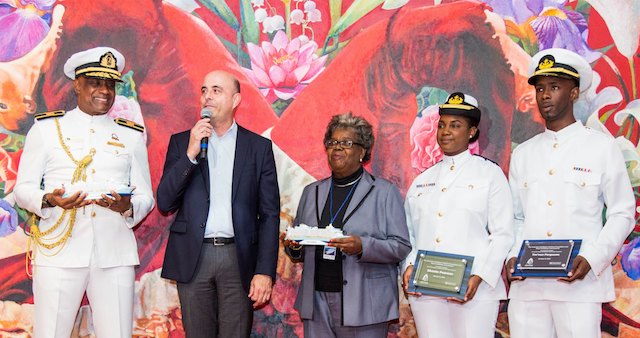 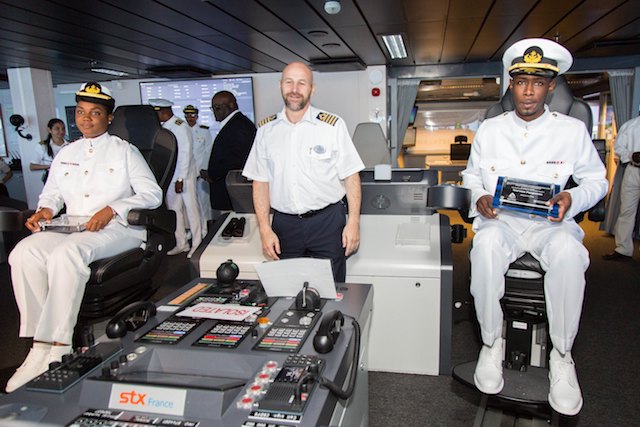 Sitting in the Captain's chair
Getting the Feel of It – Symphony of the Seas Staff Captain Rumen Yovchev (centre) gives Royal Caribbean International scholarship recipients Shante Pearson and Tre’von Ferguson an opportunity to sit in the captain’s chair, a position they both hope to fill one day. The scholarships will allow the graduates to complete a Bachelors of Marine Transportation degree at the Caribbean Maritime University in Kingston, Jamaica. (Photography by Cay Focus Photography for DP&A.)