In a quiet, yet crucial corner of Gambier Village a lackluster lot is being transformed into a thriving greenspace designed to bring neighbours together to mix, mingle and play, reveling in the joys of outdoor activities.

Wife of the Prime Minister, Patricia Minnis envisions Gambier’s rebirth into a cultural heritage site of sorts, one where taxi drivers and tour operators would bring tourists to experience one of the oldest communities in New Providence.

“We want to make Gambier into a cultural village,” she explained Wednesday at an informal gathering on the park of the public and private partners involved with the initiative. “We have to upgrade. We have to clean-up the areas as well as renovate the park.”

Beautifying the existing community park, a place where residents of all ages and stages of life come to connect, was the perfect place to commence turning that dream of a cultural renaissance into a reality.

The goal, according to Mrs Minnis is to keep the community together, bring economic empowerment to individuals as well as provide the neighborhood children with a great place to play.

“As you build communities, you start to build families and then you are able to build the nation,” said Mrs Minnis, who knows the community well from frequent visits to the area. Gambier Village sits in her husband’s constituency, Killarney. Mrs Minnis herself has adopted the neighborhood school, Gambier Primary.

The untapped potential of the open space grabbed the attention of officials in the Department of Culture back in March last year. Drawings were prepared under then Minister of Youth, Sports and Culture Michael Pintard with the support of the Gambier Community Association.

The Ministry’s Gambier Project Officer, Dr Ann Higgins said the initiative gathered steam in November when the Ministry of Environment and Housing and the Ministry of Public Works came onboard. The former was tasked with site preparation and clearing the area including the removal of derelict vehicles, while the latter is set to construct sidewalks.

Another element of the revitalization plan is to renovate a home which sits in the shadows of the park. That component is expected to take two months, according to Dr Higgins.

In a bid to accelerate the speed of the redevelopment process, residents of the area contacted Bahamas Striping to revitalize its volleyball and basketball court which were looking a bit tired.

“Bahamas Striping was just willing and able to come and make the difference in the pavement of the volleyball and basketball court, to come in and give back to this community like they have done for other communities,” said Dr Higgins.

For Bahamas Striping Group of Companies (BSGC) President Atario J Mitchell aligning himself with the initiative was a no-brainer. Open spaces are critical to helping residents in a neighborhood bond, building stronger, safer and healthier communities, he said. It’s why BSGC went “all in” from day one.

“I spent hours on the basketball court as a kid, so I know first-hand what a difference it made in my life to have that positive, physical outlet available to me, somewhere I could go to gather with friends and work out any physical aggression and leave it there on the court,” said Mr Mitchell who will spearhead the make-over of the basketball and volleyball courts.

This will be the third basketball court Bahamas Striping has completed with the rubberized, cushion material designed to lessen the impact on the joints of players. Like Eastwood Park and Malcolm Park, this court will sport the company’s signature design – colours of the Bahamian flag.

Aside from giving the courts a face-lift, BSGC went one step further in reaching out to companies it previously worked with, bringing other subcontractors along.

“We wanted to start the New Year off right, by giving. When we picked up the phone and called potential subcontractors and said, ‘We have a community project and we’d like your partnership,’ not a one hesitated. They were all onboard,” said the company’s managing director, Dr Allen Albury.

“It is often said that Bahamians cannot work together, but this partnership of half-dozen small and medium size businesses is a shining example that we can work especially with a shared vision to support such great community efforts.”

Khadaff Whyms owner of K.W. Paving conducted the asphalt repair work at both courts, while Whittington Kelly, proprietor of Ding Fencing will repair and replace, as needed, the perimeter’s fencing.

Vice president and a co-owner of Walker’s Industries, Hilliard Walker said his company will provide and install new LED, state-of-the-art lighting with motion detectors to enhance visibility and safety at night.

“Whatever we can do to bring more people together in a safe, fun, family-oriented environment we are happy to do it,” he said.

Meantime, landscaping and maintenance company True Green was tapped to beautify the grounds.

“We are going to remodify the whole landscape with some cultural plants like the Lignum vitae, the national tree and some Yellow Elders, the national flower,” said True Green’s co-founder, Ryan Ferguson whose first order of business is to thin out the Poinciana tree. If left unchecked, its branches will interfere with the basketball court’s new backboard and rim.

“We’re going to cut and trim the lawn and provide formal ground cover hedge and plants to compliment the court and bring colour to the park, right now it’s all green.”

Stepping up to renovate the restrooms, in addition to replacing and repairing the park’s benches is Carib Construction, headquartered on Gladstone Road.

“We do it because we love people and community work in general,” said Tony Lewis, the firm’s project manager.

The goal, according to Mrs Minnis, is to have the overall village setting completed by the end of the summer in time for Gambier Day in August.

“We have been looking forward to this for a while,” said long-time resident, Latoya Culmer. “This is a great initiative.”

As the government looks for another private partner to donate playground facilities to the initiative, Mrs Minnis shared a bit of advice to the public.

“We need to learn to give back,” she said. “There is so much to be done in our communities. Many hands make light work. It makes the finances easier as well.” Work at the community park in Gambier Village will continue through the month of January as the government and a consortium of businesses led by Bahamas Striping Group of Companies transform the open space into a cultural village. Photo by Precision Media 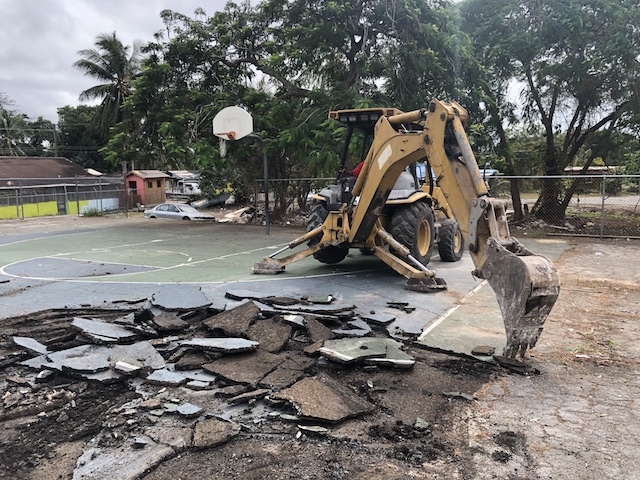 In a bid to accelerate the speed of the redevelopment process, residents of the area contacted Bahamas Striping to revitalize its worn-out volleyball and basketball courts. In turn, the company brought another six sub-contractors onboard to help revitalize Gambier Park, including K.W. Paving. Photo courtesy of Bahamas Striping.