It has been four weeks since the Nassau Night Market launched on December 15th and the street festival that brings together vendors, artisans, artists, and entertainers from across the island to downtown Nassau every Saturday night is impacting lives while as it works to rejuvenate the Downtown nightlife.

When Nassau Night Market founder Brandon Kemp first launched this event, he foresaw the value that it could bring tourists and Bahamians looking for something to do downtown.

But he underestimated what the Nassau Night Market meant for the local vendors who participate in the event.

“So far, 25 vendors have sold their products at the Nassau Night Market.

Nearly all the vendors are budding entrepreneurs working two jobs in order to get through the week while pursuing their dreams of seeing their own businesses take off,” said Kemp.

“A really great example is of Heita and James Minnis, the owners of Junior’s Jerk Pit. During the week, Heita works at Family Guardian and James works in the security department at the University of The Bahamas.

On December 22, they attended their first Nassau Night Market and were placed on the edge of Market Slope, bordering Bay Street.

The moment the coals got started, the crowd formed and Junior’s Jerk Pit had a queue which remained for hours.”

Mr. and Mrs. Minnis had never intended to stay for the event themselves. It was their anniversary and they had two $100 ball tickets.

Although they had two helpers who were going man their station once everything was set up, the Minnises quickly made the decision to forget the ball and stay at their jerk pit.

“It was truly amazing and exciting,” noted Kemp.

“Mrs. Minnis had tears in her eyes as she recounted their experience and she told us it had always been a dream of theirs to be downtown.”

Nassau Night Market will be open on Market Slope, directly east of the Nassau Straw Market every Saturday from 6 pm- midnight.

Visitors will have the chance to patronize small businessmen with unique products that cannot be found in a mall or shopping plaza. Entrance is free. 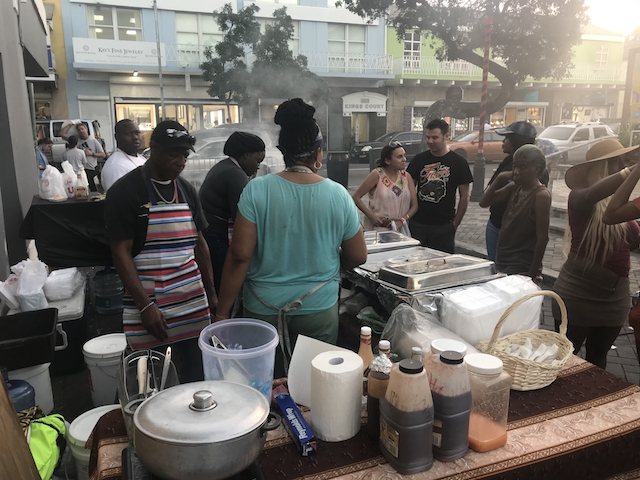 Before the event started, Junior’s Jerk Pit was already drawing a crowd. 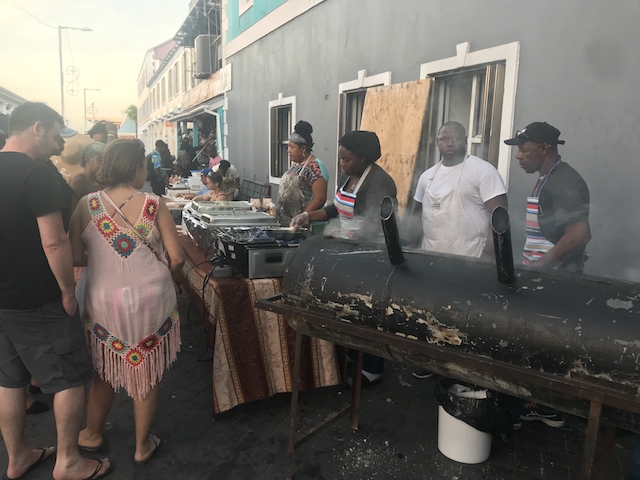