Minister of National Security the Hon. Marvin H. Dames, said, on January 6, 2019, that, despite the accomplishments that the Royal Bahamas Police Force officers may have had over the previous year, the nation was still faced with an unacceptable level of crime and fear of crime.

“Our Government understands that we cannot simply ‘arrest’ our way of this issue,” Minister Dames said, during the RBPF Annual Church Service, held at Annex Baptist Cathedral, Wulff and Pinedale Roads. “So since coming to office almost 2 years ago, we have attacked crime from its roots by making criminal justice improvements, increasing educational achievement, improving social justice, reintegrating offenders, and creating economic empowerment initiatives.”

Among those in attendance were Prime Minister Dr. the Most Hon. Hubert Minnis; Acting Permanent at the Ministry of National Secretary Eugene Poitier; Commissioner of Police Anthony Ferguson; Commander of the Royal Bahamas Defence Force Commodore Tellis Bethel; Acting Commissioner of Correctional Services Charles Murphy; Comptroller of Customs Dr. Geannine Moss; Director of Immigration Clarence Russell; senior officers and heads of uniformed branches of Government, including the Road Traffic Department and the Airport Authority; President of the Bahamas Christian Council Bishop Delton Fernander and numerous BCC members; members of the clergy; and family members of those members of the uniformed branches present who died in 2018.

Minister Dames stated that the Citizen Security and Justice Programme was one such initiative, that had already impacted the lives of many at-risk youth.

“Last year, we signed a contract with the National Training Agency for a programme that equips at-risk youth with the skills they need to make an honest living,” he said. “There are now 278 participants who will be completing the programme at the end of this month; 30 of whom have already secured full time jobs.”

Minister Dames noted that the Government had also signed a contract with the Bahamas Technical and Vocational Institute which allows inmates at the Bahamas Department of Correctional Services to earn technical and vocational skills before they are released back into society. This will allow them to have skills to earn an honest living and a second chance of living a crime free life, he noted.

“The first cohort of 110 inmates graduated last year and the second cohort of 110 are now in the programme,” Minister Dames said. “This is an important aspect of our rehabilitation and reintegration efforts, which will have a positive impact on crime in the medium term.”

Minister Dames noted that the establishment of the Advisory Council on Crime was another initiative that his Ministry would be completing in 2019. He added that Dr. David Allen had been identified as a suitable Chairperson.

“With his guidance, the Council will provide us with creative ideas and advice that will bolster our Government’s crime fighting plan,” he said.

Investments in the “latest and greatest” police technology and equipment were ongoing and were another key component in supporting the professionalization of Bahamian armed forces, Minister Dame stated.

“In a few weeks, we will be signing a contract for the Shot Spotter Technology,” he added. “This technology revolutionizes crime fighting. It uses acoustic surveillance technology to detect, locate and alert the police of gunfire.”

Minister Dames continued and said that real-time data of precise locations, number of shots, and type of gunfire would be transmitted to the police control room, allowing analysts to pinpoint and subsequently dispatch units to the scene with the foreknowledge of particulars before their arrival.

“Getting to a gunfire incident faster not only improves the likelihood of apprehending a perpetrator, but may also save the life of a gunshot victim,” Minister Dames said.

The second phase of the expansion of the police fleet of vehicles was in motion, as another $3.4 million dollars would be spent to provide additional police cruisers, SUVs, T-3 Segways and ATVs, Minister Dames noted. Those vehicles, he said, would be hitting the streets across The Bahamas - from Bimini to Inagua - within the first quarter of 2019.

Minister Dames said that the National Neighbourhood Watch Council (NNWC), which was launched by Prime Minister Dr. the Most Hon. Hubert Minnis in April 2018, was already having a major impact on the safety and quality of life within communities.

“The 77 nationally recognized groups in New Providence and eight in Grand Bahama have been busy working to strengthen their relationship with the police,” he said. “By conducting foot patrols, vehicle patrols, and communicating with their divisional liaison officers, NNWC members have helped to reduce incidents of crime, particularly with thefts of vehicles.

“The NNWC is already affiliated with an international neighbourhood watch organization called Neighborhoods USA and will participate in its first international conference this summer.”

Minister Dames pointed out that the 134 new police officers had already been posted to various divisions in line with recommendations from the Manpower Audit. An additional 130 recruits would begin training shortly, as “we move to bring the Force’s strength up to appropriate levels”.

He added that the Police Reserves Audit would be completed shortly and its recommendations were aimed at addressing the concerns that reservists and regular officers share alike.

“Let me assure you that we will get this right,” he said.

Minister Dames stated that succession planning was a very important aspect of any progressive organization as it prepares and develops future leaders.

“A number of you in the senior ranks are nearing the end of your prestigious careers; and before we know it, the Force will need a new generation of leaders,” Minister Dames said. “Now is the time to look throughout ranks and identify officers who demonstrate the capacity to hold the top ranks in the Force.

“These officers must be trained, tasked, exposed and prepared to assume these critical positions in the dynamic field of policing.”

Minister Dames noted that a Memorandum of Understanding (MOU) between the University of The Bahamas and the Ministry of National Security would be signed shortly.

“This MOU will also involve a partnership with the John Jay College of Criminal Justice in New York, which is one of the top schools for criminal justice in the United States,” he said. “The MOU will facilitate two Professional Certifications programmes; one in Law Enforcement Management and the other in Law Enforcement Leadership.”

He noted that mid to senior-level law enforcement officers would be targeted and specific courses would include finance, budgeting, human resources and critical issues facing police leaders globally.

“This programme is a key aspect of a broader succession plan for all law enforcement agencies,” Minister Dames said. “As a result, within the next few years, each law enforcement agency will have a cadre of competent officers from which the new generation of leaders will be selected.” 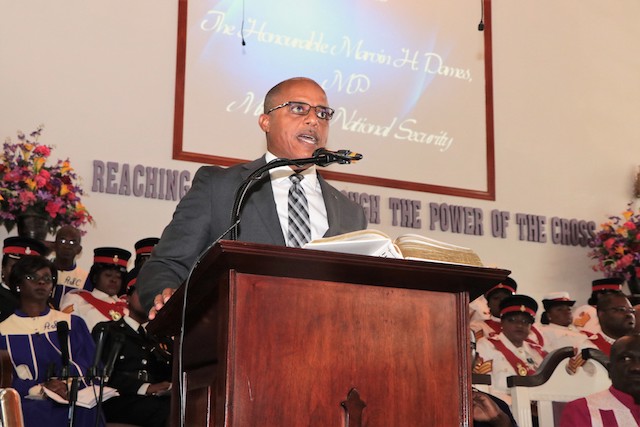