The Deputy Prime Minister and Minister of Finance, the Hon. K. Peter Turnquest, led a delegation to Brussels and Paris this week, for frank discussions with high ranking officials within the European Commissionand the Organization for Economic Co-operation and Development (OECD) on The Bahamas’ compliance with international standards on tax governance.

Accompanying the Deputy Prime Minister was the Minister of Financial Services, Trade & Industry and Immigration, the Hon. T. Brent Symonette; the Attorney General and Minister of Legal Affairs, Sen. the Hon. Carl W. Bethel QC;and a senior advisor from each of their respective ministries.

In Brussels, the delegation had a series of bilateral meetingswith the Code of Conduct Group, the Directorate-General for Taxation and Customs Unions and other representatives of the European Commission. In Paris, the delegation met with the Deputy Secretary General of the OECD, the Deputy Director of the OECD Center for Tax Policy and Administration,and the Head of the Secretariat of the Global Forum on Transparency and Exchange of Information for Tax Purposes. 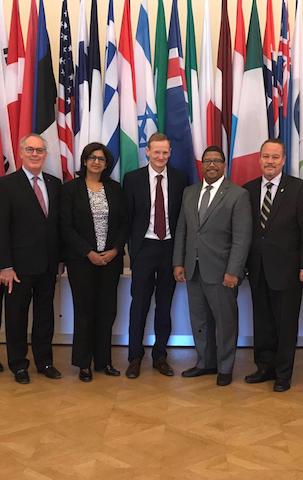 Themeetings centered around the high-level commitments that the Government has madewith respect to the EU’s criteria on economic substance and transparency and the OECD’s anti-Base Erosion and Profit Shifting (BEPS) minimum standards.

Deputy Prime Minister Turnquest provided an update of The Bahamas’ efforts to fulfil its commitments and reinforced that while The Bahamas will meet the December 31st2018 deadline, some consideration should be given to the challengesjurisdictions faceimplementing such extensive reform within such a short timeframe.

He furtherstressed that the constant threat of black or grey listing is a major constraint to economic development and has repercussions that are feltwell beyond the financial services industry.

The EU and OECD officials were presented with draft copies of the Commercial Entities (Substance Requirements) Bill, the Removal of Preferential Exemptions Bill, the Register of Beneficial Ownership Bill and the Non-Profit Organizations Bill.

These bills will be enacted by the end of this month, reinforcing the Government’s intent to take all necessary steps to safeguard the financial sector and ensure the removal of The Bahamas from all watch lists in the shortest time-frame possible.

According to Deputy Prime Minister Turnquest, “The meetings were very productive and we feel that the Europeans now have a greater understanding that The Bahamas has always been focused, at the highest political level, on protecting the integrity of the Bahamian financial system from abuse.

Our approach has been to take a holistic view of the challenges that confront us and pragmatically do what promotes the long term viability of our financial services industry.”