Ed Smith, who was a college All-American, the first native Bahamian drafted by an NFL club and played two seasons for the Denver Broncos, will serve as the 2018 Makers Wanted Bahamas Bowl Honorary Ambassador.

Smith will speak at a press conference prior to a private Makers Wanted Bahamas Bowl Kickoff Party on Tuesday, Oct. 23, which is his 68th birthday, and he will be honored during the 2018 bowl week, assist with the bowl’s annual Youth Football Clinic on December 19 and be recognized by the bowl during the fifth-annual game in Thomas A. Robinson National Stadium on December 21.

“I am looking forward to serve as the Honorary Ambassador for the Makers Wanted Bahamas Bowl this year,” said Smith. “Football has come a long way, and the Makers Wanted Bahamas Bowl is a stepping stone for the growth of the game in the Bahamas. There is so much potential for the game of football to continue to grow in the Bahamas, and the bowl and the youth football clinic encourages more kids to enjoy and partake in the game. The speed and athleticism that Bahamian athletes naturally possess can’t be taught, but the other skills needed in the game can, so they can have opportunities to play the game at higher levels.” 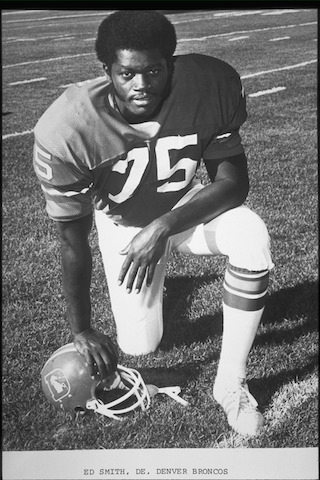 “We are proud to recognize Ed as our 2018 Honorary Ambassador for his football accomplishments,” said Richard Gianinni and Lea Miller-Tooley of the Makers Wanted Bahamas Bowl. “Ed was the first Bahamian to truly make his mark in college football and the NFL, and he set an example for countless Bahamian players over the years who followed his lead to play college football. We could not think of a better person to have as our ambassador this year for the Makers Wanted Bahamas Bowl.

A native of Nassau, Smith went to school at St. Augustine’s College, where he was a multi-sport athlete for The Big Red Machine. He moved to the United States in 1965 at age 15 and attended Denver’s George Washington High School, where he began to play football competitively. He became a three-year starter at defensive end at nearby Colorado College, and he was selected by the American Football Coaches Association (AFCA) as a 1972 College Division I Kodak All-American.

The 6-5, 241-pound defensive end played in five games in his rookie season, and he made his first NFL tackle against the Cincinnati Bengals in the 1973 season opener.

In 1974, Smith saw action in 13 games with three starts as he played on the defense alongside a pair of future Broncos Ring of Honor members in Randy Gradishar and Tom Jackson with Lyle Alzado, who would all be cornerstones of the Broncos late-1970s famed Orange Crush units. During that season, he got his first NFL interception as he picked off Baltimore Colts quarterback Marty Domres in a 17-6 November victory.

Smith tore a knee ligament just prior to the 1975 season opener, which effectively ended his pro football career. He officially retired from the NFL before the 1977 season.

Smith’s son, Alex, followed in his footsteps as he played in the NFL for 11 seasons (2005-15) as a tight end with the Tampa Bay Buccaneers, Philadelphia Eagles, Cleveland Browns, Cincinnati Bengals and Washington Redskins.