For tourists, The Bahamas conjures up images of sugary sand beaches and breathtaking tropical vistas, but for a majority of its 400,000 residents, the reality is far less glamorous, particularly in New Providence where natural beauty is marred by litter and pride in surroundings is too often an endangered commodity.

That sad state of affairs could all change if an ambitious program launched today by the Ministry of Environment succeeds.

Called “Be A Hero, Make Your Bahamas a Clean Safe Bahamas” the campaign targets all primary and middle school students in the capital with a practical application and social media-based competition.

The broad-based campaign involving students in public and private schools is the brainchild of Environment Minister Romauld Ferreira.

“We are extremely excited about this programme because for the first time we have a clean-up campaign where the young people are the influencers delivering a message that it is cool to care about your environment,” Ferreira at today’s press conference announcing the launch.

“Disrespect for property transfers into disrespect for authority. So when our streets and communities are clean, crime decreases, community spirit increases, schools and students fare better and people feel liberated and happy in their environments.”

So long as temporary clean-ups are relied on, the basic culture will not change, the Minister said.

“We want to go beyond cleaning up litter, waste and abandoned vehicles. We want to change the mind-set to instill pride in community so in the future we are not looking at a disaster and trying to fix it on a temporary basis but we are all enjoying cleaner, more inviting and safer communities. And to do that, we have to start with the young people,” he said.

According to Ferreira, there are strong statistics supporting the link between clean environments and safer communities.

“There is a vast body of research showing higher crime rates and more aggressive behavior in dirty communities and where litter is strewn all about,” said the Minister.

“Even in highly dense urban areas of low-cost public housing in the U.S. studies have shown that crime is reduced when there are green and clean spaces.

A simple act of clearing out overgrown bush, planting trees and creating green space can make a world of difference in how people feel about where they live and how they treat people around them.”

Ferreira said the program aims to instill in students a sense of personal responsibility.

“In addition to a sustained cleanup effort the Ministry of the Environment and Housing will go the extra mile to change the mind-set of the average Bahamian citizen to instill a sense of pride in their communities that will lead to cleaner, more inviting and safer environments.

“In order to achieve this goal, we will target and actively engage the youth of our nation. We believe in our nations young people and their ability to be agents of positive change.

Today, we want Bahamians to understand that the government is not responsible for cleaning up behind them.

Instead we will empower Bahamian people, especially the youth of the nation, to clear down overgrown bushy areas, plant trees and create more green spaces.

“When these simple acts are completed with forethought, consistency and urgency, there is a marked difference in how people feel about themselves, the way they feel about where they live and how they treat people around them.

“We want students to be empowered to make a difference. We need them to be courageous, and to stand up to anyone they see littering, including their parents.

We also need them to discourage their peers and grown-ups from throwing wrappers out of a car window or dropping fast food containers on the ground.

“Shifting a national mindset includes helping young people to be sensitive and intolerant of littered verges and sidewalks and illegal dumping in vacant, overgrown lots.”

The campaign calls for students to identify a project at their school or in the neighbouring community to improve over a six-month period.

The campaign launches with local sports, music and civic heroes who will be replaced at the end of six months by the school heroes – those who have done the most impressive job and whose missions have gained the most active following.

Students may clean up and green up an area. Forms of competition are open and may be school against school, grade against grade or classes within grades. Participants are permitted to raise money for receptacles, create a park, fund a vegetable garden or paint an abandoned building, but may not use the Ministry of Environment to collect funds or indicate that they are doing it on behalf of the Ministry, only that they are participating in a program endorsed by the Ministry to improve their school district.

At the end of a six-month period, each school will present its winner, which could be an individual, a class or grade.

In the coming weeks a team from the Ministry of the Environment will make the rounds at local schools spreading the word about the program, in some cases accompanied by one of the local heroes.

Meantime, billboards, bus signs and advertisements sporting the campaign’s heroes are set to debut around town.

“Those who have made the most impact on their street or school will be honoured as the new Super Heroes and their images will replace the original heroes on visuals.

They will have opportunities to meet dignitaries, we hope including the Governor-General and we will invite them to the House of Assembly,” said Mr. Ferreira.

“They will become the influencers, delivering the message that it’s cool to care about your environment. 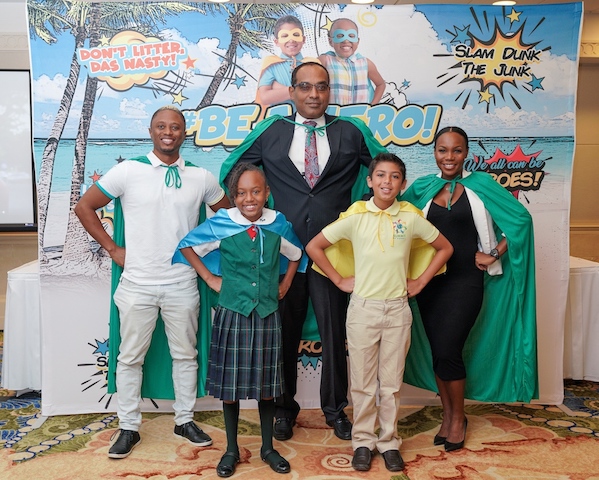 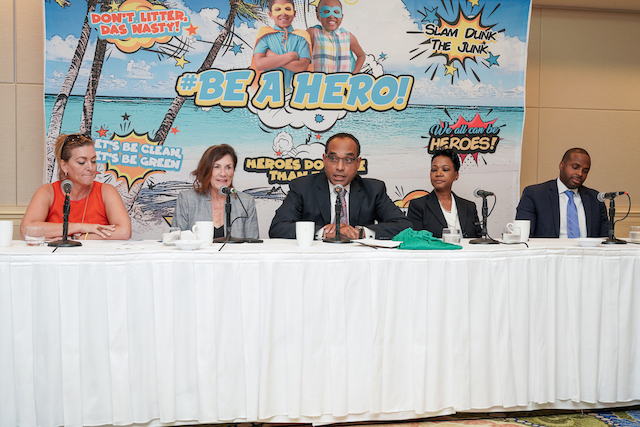