Aviation expert and leading advocate for an international aircraft registry in The Bahamas today clarified what he said has been widely misunderstood – the purpose for a provision in the 2018-2019 that removes Customs duties from aircraft.

“I think there has been an unfortunate misunderstanding that the removal of 10% Customs duties from all imported aircraft was proposed to aid the high net worth individual who owns a private plane and can now fly in and out of The Bahamas free as a bird without paying his or her dues,” said Llewellyn Boyer-Cartwright, legal advisor to the airline industry and partner at Callenders law firm.

“Because the proposal to remove duties on what can be perceived as luxury goods like jets coincided with the increase in Value Added Tax as government was trying to identify additional revenue sources to mitigate against the onerous debt service, there was an outcry that the budget penalized the poor and aided the rich who could afford to jet around the world on their private planes and helicopters.”

Nothing, he said, could be further from the truth.

“The government did not give up any revenue. It stands to gain because if an aircraft is registered here, its owners or lessors are going to do business here,” he said.

“That means a broad spectrum of services from catering to fueling, cleaning, engine maintenance, upholstery, servicing, pilot and crew accommodations, banking, insurance, legal work – and all of those goods and services attract VAT. The government is to be congratulated for seeing the bigger picture.

It’s not about the wealthy private jet owners. It’s about creating opportunities for Bahamian people.

“The purpose of the proposed exemption from 10% duty was to attract business we never had before. Our Customs duties were non-competitive so corporations, regional airlines, wealthy individuals including star athletes, entertainers and businesspersons registered their aircraft elsewhere like Isle of Man, Bermuda or Cayman where registries are already contributing significantly to their economies.

With the removal of those duties, we are one step closer to an international aircraft registry that will unlock an almost inexhaustible range of spin-off businesses and opportunities.”

Boyer-Cartwright estimates that the registry he and the late Colin Callender began advocating for along with the Bahamas Financial Services Board just over six years ago could become reality in less than 12 months once the project has been launched and funded.

“I want to give full credit to the Minister of Tourism Dionisio d’Aguilar who also has responsibility for aviation.

From the first time we presented the possibilities of what the aircraft registry would bring, he understood and said ‘Let’s make it happen,’ and he has championed the cause ever since,” said Boyer-Cartwright, who has served on several advisory boards.

“Randy has been an advocate of leveling the playing field, if you can call the airways a playing field, for years and I think he is the one person who has consistently kept it in the public eye.”

The timing, said Boyer-Cartwright, is ideal.

“The business jet industry which rode a roller coaster since the global recession of 2008 has now started to recover and manufacturers are racing to keep up with new orders,” he said. “Barring any unforeseen circumstances, if The Bahamas is on stream by next year this time, the climate will be perfect for take-off.” 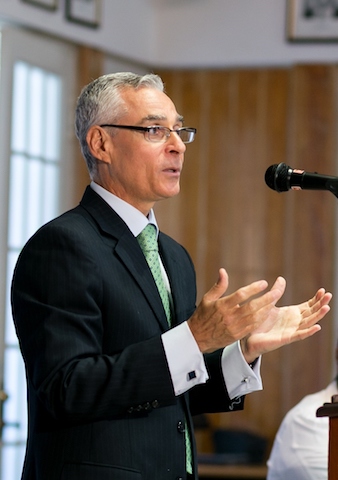 Aviation expert and former commercial pilot attorney Llewellyn Boyer-Cartwright fills in missing link in Customs duties exemption for aircraft, explaining that it is not a matter of giving up revenue because corporate and business jets were not registered here before. The new policy opens the door for the Bahamas to become an aviation hub anchored by an international aircraft registry.