Football for Friendship ("F4F") announced that 12 year old Bahamian football player Jordin Wilson will participate in the Opening Ceremony of the FIFA World Cup in Moscow, Russia, scheduled to be broadcast live to 3.2 billion persons globally on Thursday, May 14th, at 10:30 am EST. 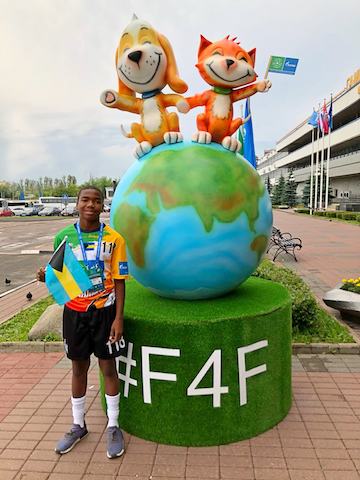 Jordin will be carrying the Bahamian flag during the ceremony, as the youth representative of The Bahamas, alongside children from around the globe.

Jordin and the Bahamian F4F delegation have been in Moscow since June 9, participating in the global Football for Friendship event.

Participants have had the opportunity to discuss among their peers the key values of the program such as friendship, equality, fairness, health, peace, devotion, victory, tradition and honor.

Jordin was selected to attend F4F by The Bahamas Football Association (BFA), the governing body for soccer in the Bahamas, as one of two young Bahamian football players to represent the country.

Jordin has been an active football players since he was 5 years old, and is currently an active member of the Western Warriors Football Club, where he is coached by Paul James. He is the son of John and Simone Wilson and has one brother, Jostin.

The Western Warriors Football Club, founded in 2007 by Michael Hooper and Saskia D'Aguilar, have three teams in the BFA Youth League, including a Boys U15 Team, a Boys U17 Team, and a Girls U17 Team, as well as a Men's Team in the BFA Senior League.