He made the declaration in his address of Mr. Gaskin’s swearing in ceremony in the Drawing Room of Government House.

“We witness the very first successfully implemented amendment to our Nation’s Constitution, with the confirmation of Mr. Garvin Gaskin, in the new Constitutional Office of this Nation’s first Independent Director of Public Prosecutions,” the Prime Minister said.

Before a packed audience comprising Mrs. Odia Gaskin and other family members, members of the legal profession, and members of the Church of the Most Holy Trinity, Mr. Gaskin pledged to uphold the tenets of his post and that of the Constitution of the Commonwealth of The Bahamas.

According to the Prime Minister, the historic (June 11, 2018) occasion marked an important advancement in good governance and democracy in the country.

“It is an important day in the creation of a more civil society. It also marks another fulfillment of a promise made to the Bahamian People during the last campaign,” he said.

Mr. Gaskin was a Public Legal Officer serving in the public service post of Director of Public Prosecutions; however, as a consequence of the deeming provisions in the Constitutional Amendment Act, passed earlier this year by Parliament, Mr. Gaskin was confirmed under Article 78B of the Constitution, for the period of five (5) years.

Mr. Gaskin graduated from the University of the West Indies, and the Norman Manley Law School of Law in 1995. He has had a long and distinguished career as a public prosecutor, having joined the Office of the Attorney General in 1996, after a short stint in private practice.

“Since then he has risen through the ranks, earning a reputation as a highly competent and effective prosecutor before the Supreme Court, Court of Appeal, and the Privy Council,” the Prime Minister noted.

Since 2015 Mr. Gaskin was appointed Acting Director of Public Prosecutions upon the departure of the former office holder, Mrs. Vinette Graham-Allen.

“The establishment of a constitutionally protected office of an Independent Public Prosecutor is a praiseworthy achievement for Bahamian democracy, as it has the potential to mark a clear break with the past,” the Prime Minister said.

The Prime Minister said that hopefully, the days are over where persons, even ill-disposed persons, could credibly suggest some kind of political influence over the commencement, or conduct of public prosecutions.

“Hopefully, any suggestion of political influence over prosecutions by the Executive arm of government will now be a thing of the past,” he said.

The Constitution of The Bahamas now requires that any policy directives given by the Attorney General to the Director of Public Prosecutions must be in writing and published in the Gazette for the public to see. 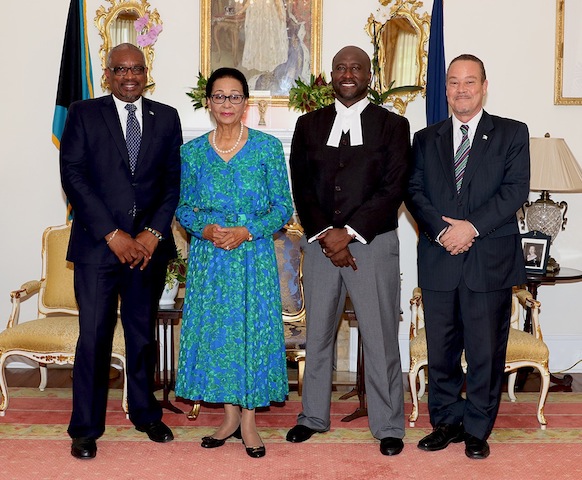