Rebecca Chapter No. 4, Order of the Eastern, Prince Hall Affiliated was founded on June 12, 1964 by Past Grand Master, James Morley and his wife Mary Morley.

A few months later it was turned over to its first Worthy Matron, Lillian Bridgewater.

The chapter is a part of the Eastern Star which is an Adoptive Rite to Freemasonry and a Prince Hall Affiliate.

It celebrates its 54th anniversary under the leadership of its 24th Worthy Matron, Tanya Smith-Cartwright.

The Chapter meets every second and fourth Thursday at Prince Hall which is located at Baillou Hill Road and is the female counterpart of Columbus Lodge No. 16 which is also a Prince Hall Affiliate.

Rebecca is known for its charitable work in the Bains and Grants Town Community where it holds a regular soup kitchen and gives out clothing.

Rebecca has also adopted the Robert Smith Ward at Sandilands where its members purchase clothing, shoes etc for the children and have recently planted a garden in the ward's atrium.

Rebecca started its anniversary celebrations on Sunday by attending St. Christopher's Anglican Church, Lyford Cay and on Monday made a Courtesy Call on Dame Marguerite Pindling, Governor General of The Bahamas where they honored the 54 year old establishment by making Dame Marguerite an Honorary Member of the Chapter.

As a part of its celebrations, Rebecca read stories to the children of Claridge Primary School and will hold its mystery soup kitchen during this week. 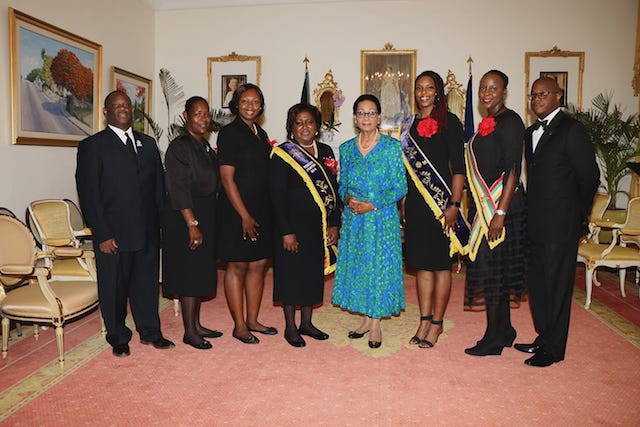