Students around the region will continue to benefit from a number of scholarships following the recent signing of another memorandum of understanding (MOU) between the University of the West Indies and CIBC FirstCaribbean International Bank.

This is only one part of the far-reaching benefits outlined in the agreement between the two organisations which also includes funding for research in banking and finance, the advancement of knowledge and understanding of issues affecting business in the Caribbean as well as the support and development of UWI programmes and students around the region among other initiatives.

Described by UWI Pro-Vice Chancellor and Principal, Professor Eudine Barriteau as ‘a meaningful example of a flourishing corporate-academic partnership’ which has yielded significant returns over the years, the MOU was initially established to build a long-term partnership in support of regional development and for the mutual benefit of the two organisations.

CIBC FirstCaribbean’s Chief Executive Officer Gary Brown lauded the quality of the programmes at UWI confirming that he witnessed it every day since a number of the bank’s staff were graduates of the University of the West Indies. “The young people who pass through the three campuses represent the future of the region and we consider it a part of our responsibility as a major corporate citizen in the Caribbean to contribute to its development through the training of its future workforce and leaders. We consider these funds as money well spent” he stated.

The first MOU was signed in March of 2003 shortly after the bank was formed and the recent fourth signing covers another three-year period, carries a value of US $330,000 and introduces a new feature. There is new emphasis on support to students, research, projects and activities that relate to Information and Communications Technology (ICT). There will be an annual grant of US$5,000 to fund one or more mutually agreed and jointly executed projects. This will happen through the UWI Smart Campus Initiative and was proposed by the bank’s technology team who wish to become more involved in the work done on campus.

The MOU will be administered from the Cave Hill Campus but students at all three campuses – St. Augustine and Mona - will benefit from the programmes and scholarships outlined in the agreement. To date, over the life of the MOU, CIBC FirstCaribbean International Bank has given US $1.6 million to the University of the West Indies and is the largest contributor of scholarships to the organisation.

The signing ceremony was followed by the unveiling of a plaque on the grounds of the Cave Hill Campus that tangibly commemorates the relationship between the two organisations. 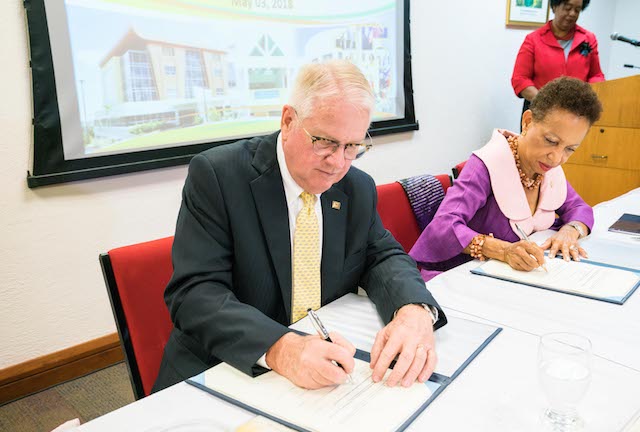 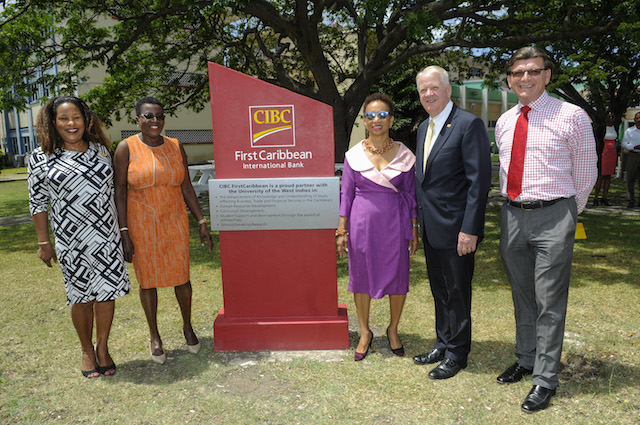 About CIBC FirstCaribbean
CIBC FirstCaribbean is a relationship bank offering a full range of market leading financial services through our Corporate and Investment Banking, Retail and Business Banking and Wealth Management segments. We are located in seventeen (17) countries around the Caribbean, providing the banking services that fit our customers’ lives through approximately 3,000 employees in 68 branches and offices. We are one of the largest regionally listed financial services institutions in the English and Dutch speaking Caribbean, with over US$12 billion in assets and market capitalization of US $2 billion. We also have an office in Hong Kong. The face of banking is changing throughout the world and CIBC FirstCaribbean intends to lead these changes with the expertise, integrity and knowledge gained from banking in the Caribbean since 1836.

CIBC FirstCaribbean is a member of the CIBC Group. CIBC is a leading Canadian-based global financial institution with 11 million personal banking and business clients. Through our three major business units - Retail and Business Banking, Wealth Management and Capital Markets - CIBC offers a full range of products and services through its comprehensive electronic banking network, branches and offices across Canada with offices in the United States and around the world.