Grand Bahama’s much anticipated economic turnaround took a positive step with a major investment in West End expected to come on stream soon, pending the signing of a Heads of Agreement with the Government of The Bahamas.

Attending a Town Hall Meeting in West End on Friday, June 8, 2018 to discuss the investment were: Deputy Prime Minister and Minister of Finance, the Hon. K. Peter Turnquest; Minister of State for Grand Bahama, Senator Kwasi Thompson; Parliamentary Secretary in the Office of the Prime Minister, and Member of Parliament for West Grand Bahama and Bimini, Pakesia Parker-Edgecombe, representatives of BEST Commission, and residents from West End who turned out in full force to hear first-hand about the plans for the new Grand Bahama Bay.

“The unique thing about this project thus far is the level of local community involvement that has been a part of the project, and this Town Hall meeting is just another example of that,” said Minister Turnquest, following the meeting.

“The proposed overall project is very exciting for West End and for Grand Bahama and it could signal the beginning of the turnaround that we have been talking about for Grand Bahama. We are very excited about this project and what it could mean for this community.”

The proposed project could comprise over $2 billion invested in the quaint community of West End. Grand Bahama Bay is a project to be undertaken by Skyline Investments, through Grand Palm Beach Acquisitions Limited. The Canadian-based company has proposed to purchase 2,012 acres of real property, located in the western section of Grand Bahama Island, previously known as the Ginn Sur Mer Project.

The new development will be known as Grand Bahama Bay.

The Town Hall Meeting was held at Mary Magdalene Anglican Church in West End and was hosted by the Member of Parliament, Mrs. Pakesia Parker-Edgecombe, who said that the purpose of the meeting was two-fold – to present information and obtain feedback from the community.

One of the key principals in Skyline Investments, Danny Rothman, Chief Operating Officer, was on hand to share his vision with the people of West End and to hear their concerns.

“We have an opportunity to do something big, something unique, not just in Grand Bahama, but in the entire Caribbean,” said Mr. Rothman. “And the community of West End will play a big role in making this dream a reality.”

With over 2,000 acres at their disposal, Skyline Investments is looking to develop a one-of-a-kind resort that will include three hotels, including a Ritz Carlton Hotel; a major marina with some 150 slips; commercial shopping district with restaurants, ice cream parlors, retail and boutique stores, a supermarket, a resident village, with state-of-the-art homes for sale; a Smart City, which will act as a headquarters to high tech start-ups; personal businesses and consultancies, which will attract innovators from all over the world; state-of-the-art solar energy system making Grand Bahama Bay the first fully integrated green community in the Caribbean; a casino and another marina that will be designed specifically to accommodate mega yachts.

Deputy Prime Minister Turnquest noted that a great feature of the project is it will allow guests at the hotels to intermingle with the residents of West End, which will help to expand the cultural experience of visitors to Grand Bahama, West End in particular.

“Normally, in developments like these they try to keep the visitors in the hotels to one side and the residents to the other, but this project will allow interaction,” he said -- part of the charm of West End being its people and its culture.

“The fact that the developers have agreed to be a part of this Town Meeting indicates their willingness to have the people involved in this project, even before anything actually begins, and that to me is a good thing.”

Minister of State for Grand Bahama, Senator Kwasi Thompson said the meeting between the developer and the people of West End was an important one, particularly before the signing of the Heads of Agreement.

He noted that the Developer presented the vision to the people, who were receptive to the project. He pointed out that while some residents expressed some concerns, for the most part, the proposed project was well received by the people of West End.

“There is no doubt that this project is going to provide great opportunity for West End in particular, and for Grand Bahama, generally. We are going to work very hard to help this development come to fruition and to see some real opportunity be provided for the people of Grand Bahama.”

Deputy Prime Minister Turnquest said now that the Government and the Developer have gotten favourable feedback from the residents of West End, plans are underway to arrange the signing of a Heads of Agreement for the project.

“There is no doubt that this project will be beneficial to Grand Bahama both in the short term and in the long term once this project begins,” said Minister Turnquest. “But overall, we’re excited about the amount of jobs that will be provided by a project of this magnitude in every single phase.”

Director of Operations for the West End project, Derek Gape, stated that the project will develop over a 10-year period. Mr. Gape explained that following the signing of the Heads of Agreement with the Government of The Bahamas, initial goals for the first 24 months of the project will include: creating a new 120-room hotel with commercial retail spaces and amenities; redeveloping and reopening the West End Airport; adding an additional 75 slips to the existing marina at the current Old Bahama Bay site; and bringing the world-class golf course into full operation. 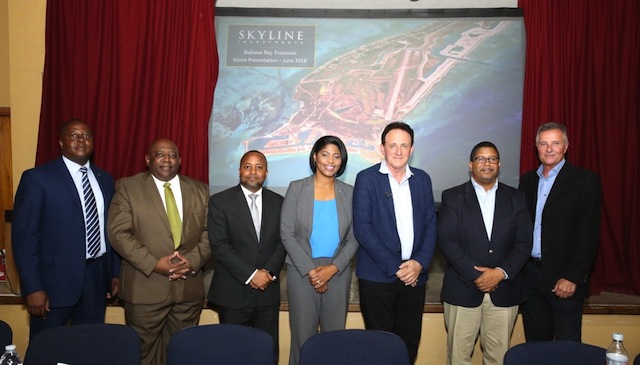 A JOINT VENTURE – A Heads of Agreement between the Government of The Bahamas and Skyline Investments is expected to be signed soon for a major development in West End. A Town Hall meeting, to give West End residents the vision for Grand Bahama Bay, was held on Friday, June 8, 2018 at Mary Magdalene Anglican Church in West End. The meeting produced a favourable response from residents. On hand for the meeting were (from left) Don Cornish (Administrator for West End); Harcourt Brown, Permanent Secretary in the Office of the Prime Minister; Senator Kwasi Thompson, Minister of State for Grand Bahama; Pakesia Parker-Edgecombe, Member of Parliament for West Grand Bahama and Bimini; Danny Rothman, Chief Operating Officer for Skyline Investments; Deputy Prime Minister, the Hon. Peter Turnquest and Derek Gape, Director of Operations for Skyline Investments. (BIS Photo/Andrew Miller) 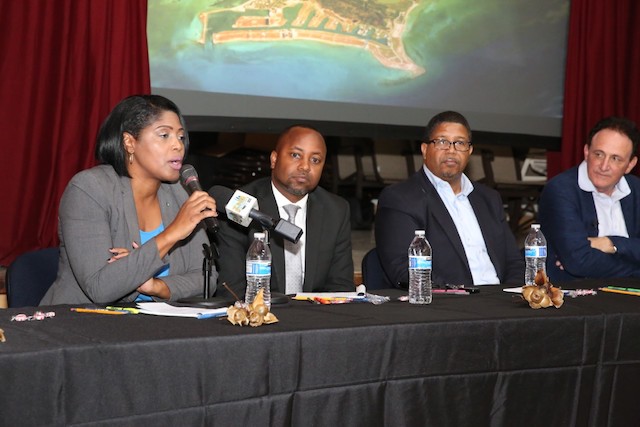 TOWN HALL MEETING – Parliamentary Secretary in the Office of the Prime Minister and Member of Parliament for West Grand Bahama and Bimini, Pakesia Parker-Edgecombe answering a question, during the question-and-answer period of a Town Hall meeting in West End on Friday, June 8, 2018. The purpose of the meeting was for developers of Grand Bahama Bay to present their vision for a major development in West End over a 10-year period, which could revive entire West Grand Bahama. Listening were (l-r) Minister of State for Grand Bahama, Senator Kwasi Thompson; Deputy Prime Minister, the Hon. Peter Turnquest and Danny Rothman, Chief Operating Officer for Skyline Investments. (BIS Photo/Andrew Miller)