During his Budget Contribution in the House of Assembly, on June 6, 2018, Minister of National Security the Hon. Marvin Dames revealed that the Royal Bahamas Defence Force (RBDF) was preparing to host the largest regional military training exercise, known as Exercise Tradewinds 2018.

"This initiative will consist of over 800 participants sailing on six naval vessels from 22 nations within the Caribbean Region, the wider Americas and Western Europe," Minister Dames said. "They will engage in simulated terrorist attacks and military responses during the Exercise taking place from the 14th to the 21st of June."

According to the RBDF, Tradewinds 2018 is an annual regional military training exercise that will be held in The Bahamas June 14 -21 and this year's exercise will focus on Countering Transnational Organized crime in the region. The Bahamas last hosted the event in 2009. The main objective of the highly-regarded military event is to foster training for security forces that is "tailored for the region by the region"; the annual exercise is sponsored by the United States Southern Command.

According to the RBDF, 22 partner nations from the Caribbean region, the wider Americas and Western Europe representing a total of over 800 troops are expected to participate in the exercise. The Bahamas last hosted the event in 2009.

Minister Dames highlighted the fact that the Royal Bahamas Police Force, Bahamas Customs and Bahamas Immigration Department were invited by the RBDF to participate.

In keeping with the topic of training, Minister Dames pointed out that in order to remain operationally current and proactive against security threats, recruitment and training opportunities geared towards the sustainable development and advancement of personnel within the Royal Bahamas Defence Force will remain a major priority of this government.

"To this end, my Ministry made provisions for the recruitment of the largest entry of marine recruits and the largest graduating class to date under the 2017/18 budget at a cost of $1,172,100," he said. "During the 18-week programme, the recruits were introduced to a three-phased approach that produced higher levels of leadership, professional competence and fitness."

"Consequently, Mr. Speaker, under its Operation Transformation Programme, the Defence Force has commenced the revision of its recruitment and training policies, in addition to the re-structuring of its training programmes for the creation of an accredited Maritime Defence Training Institute for the training of Officers and Enlisted personnel," Minister Dames added. "This military institution will focus on the development of character, leadership, management and supervisory skills, as well as the development of professional and technical skills for members of the Force."

Minister Dames said that it should also be noted that initial training for young naval officers will continue at the Britannia Royal Naval College in Dartmouth, England and the United States Coast Guard Academy in New London, Connecticut during the 2018/19 fiscal period.

However, he pointed out, the limited capacity of those institutions to increase the intake of officer candidates had made it necessary for the RBDF to embark on a new training initiative geared towards training of potential naval officer candidates at HMBS Coral Harbour as the first phase of its Maritime Defence Training Institute.

"It is envisioned that this Institute will also become a regional training center for training of young naval and coast guard officers from partner nations within the Caribbean region," Minister Dames said. "This unprecedented initiative will address the shortage of officers urgently needed to operate and command Defence Force units, assets and departments."

Minister Dames said that the 2017-2018 fiscal period also afforded Defence Force Officers and Marines the opportunity to participate in a host of local and overseas military training throughout the United States, various parts of Europe, and the Caribbean. Provisions had been made in the 2018/19 budget for Defence Force personnel to continue to engage in those courses, which are mostly sponsored by the US State Department under its International Military Education Training Programme, he added.

"A total of $477,000 has therefore been allocated within this fiscal budget for recruitment and training Officers and Marines locally and abroad," Minister Dames revealed.

"Also during the 2018/19 fiscal period, the Defence Force will introduce the first phase of its naval-infantry school as a regional center of excellence where Officers and Marines will be trained in amphibious military operations," he added. "This School will commence with its initial intake of Marines who recently graduated New Entry Training.

"Living in a country that has the largest maritime domain in the region with over 100,000 square miles of water, amphibious training is a natural fit for the Defence Force." 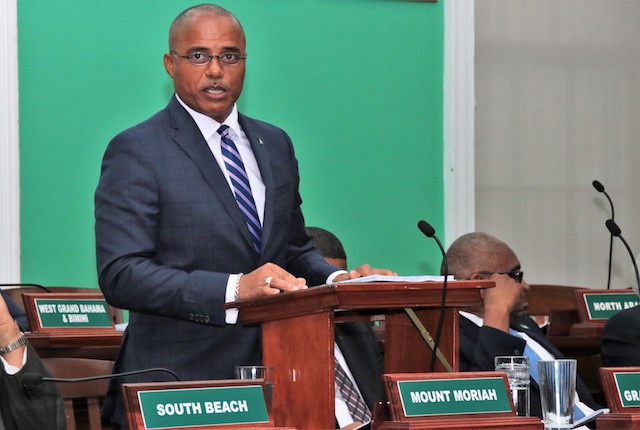 Minister of National Security the Hon. Marvin Dames speaks, on June 6, 2018, during his Budget Contribution in the House of Assembly. (BIS Photo/Eric Rose)