Developers of the 36-unit luxury condominium THIRTY SIX on Paradise Island released the final units this week as the $30 million project neared completion with 65% sold and an expected occupancy by year end.

“We are extremely pleased with how the project is evolving and excited about the response it has been generating,” said Aristo Director of Sales & Marketing Matt Marco. “To be 65% sold at this stage with completion a few months ahead is a success by any measure.”

Marco credits that success on the continuing appeal of Paradise Island and the design, style and amenities of the project itself.

“Paradise Island is a brand unlike any other,” he said. “Whether you are in Florida or halfway round the globe you know Paradise Island. You’ve seen Atlantis on TV, the golf course at Ocean Club, the waters, the beauty, and it is hard not to think that Paradise Island really is a paradise. It has a lasting appeal and the limited offerings means that demand for a world class, top quality product is extraordinary.”

THIRTY SIX, being built in partnership with Bahamas- and Cayman-based Sterling Global Financial, is the first new multi-family residential development on Paradise Island in a decade. The same demand that Marco said drove interest also drove property values up, making identifying the right property and business model while keeping the sale price at a marketable level a challenge. Aristo President Jason Kinsale also wanted to ensure that the final product would have a community feel.

“We wanted THIRTY SIX to be about lifestyle and for that to happen, you have to have the kind of people who feel like they are part of a community,” Kinsale said. “We want residents to feel proud to own at THIRTY SIX, to make friends among other residents, enjoy gathering around the infinity pool and deck, working out at the fitness centre, taking a yoga class, walking on P.I., or relying on the concierge to make dinner reservations on the island.”

If lifestyle and a sense of belonging to a community were at the heart of what developers sought to achieve, they also managed to succeed with a design mirroring the island itself.

“Just as Paradise Island is unlike any other, so is THIRTY SIX,” said Marco, standing in one of three open air atriums staggered along the centre of the structure as more than 100 workmen were putting finishing touches on the interior and heavy equipment on the exterior prepared for landscaping.

Each atrium, open to the sky, will be lushly landscaped, filled with palms, greenery and four-storey tall bamboo, providing an oasis amidst the residences. Atriums adjoin an elevator with access to four units per floor.

Interiors include nine and a half-foot ceilings, storm-rated glass, fine molding around all doors and windows, top of the line appliances, lavish bathrooms and large patios. Studio and one-bedroom units are sold out. Remaining two-bedroom, two-bath residences range from $765,000 to $905,000. Six remaining penthouses with private rooftop terraces and breathtaking views top out at $1,650,000.

A professionally managed rental program will allow the homeowner to maximize investment.

Built on the highest elevation on Paradise Island halfway between Nassau harbor and Paradise Island Drive, THIRTY SIX is 30 feet above sea level at ground level with underground parking for cars and golf carts. Ownership also entitles residents to apply for golf membership to the Ocean Club.

“You will be within walking distance of Atlantis, Four Seasons at Ocean Club, the famous Ocean Club Golf Club, all the dining, entertainment and shopping and boating options you could dream of and if you are interested in permanent residency, you will qualify,” said Marco. “But we are very pleased that Bahamians have also appreciated how special and unique THIRTY SIX is. We have sold two units so far to local residents who want to live the Beverly Hills of The Bahamas lifestyle and we have had a lot of interest from other local residents. That may be the best testament of all to the fact that we are doing something special.” 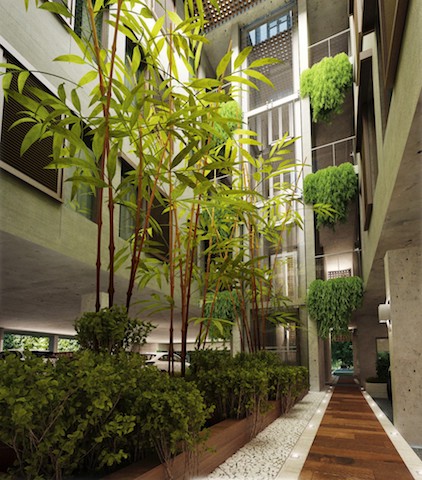