Since launching its signature Sands brands more than a decade ago, the Bahamian Brewery & Beverage Company (BBB) has consistently set the standard for quality products and quality experiences for its customers.

In addition to classic beers such as the Sands, Sands Light, High Rock and Strong Back Stout, the BBB family has also broadened its spectrum of offerings to include internationally recognized brands which are all equally loved in the local market.

Most recently, Bahamian Brewery & Beverage Company Limited introduced a new beer to its collection, this one an ode to one of the country’s most significant monuments.

Bursting with hints of nuts, and caramel the company’s new amber colored brew also boasts a malty freshness, and a well-balanced body derived from roasted malt with fine notes from selected hops.

“This craft beer is a premium limited-edition beverage for the beer drinker with discerning taste buds” explained BBB General Manager Nassau and Family Islands Gary Sands, “We’re really excited about having the opportunity to introduce this new product to the local market” he said.

Since officially launching at the end of February, supplies of the new product named after the famed Queen’s Staircase, more commonly known as the Sixty-Six steps in downtown Nassau have flown off the shelves and beer enthusiasts across NP have lined up to sample the all new taste.

The popular landmark is located within the Fort Fincastle Historic Complex and was hewn out of solid limestone rock by slaves between 1793 and 1794, providing what many believe was a direct route from Fort Fincastle to Nassau City.

These steps were later named in honor of Queen Victoria, who reigned in Britain for 64 years from 1837 to 1901.

“We couldn’t be more pleased with the response from our consumers” Gary noted, “and we hope our customers continue to support it, and all of the brands that make up the BBB selection of products.

Grand Bahamas’ “Truly Bahamian” brewery opened in 2007 with the launch of its first beer SANDS.  The 20-acre brewery is located on the intersection on Queen’s Highway and Grand Bahama Way and is a 100% Bahamian owned business. The brewery also produces “Triple B”, a natural malt drink, sold via Asa H Pritchard Distributors as well as STRONG BACK, SANDS LIGHT, HIGH ROCK AND BUSH CRACK.  Bahamian Brewery and Beverage team currently employee just over 80 staff and recently expanded its operation into Nassau, opening a capital-based distribution centre at Kelly’s Liquor Store on Wulff Rd. All Bahamian Brewery & Beverage products are also available at Bristol Wines & Spirits locations, Simms Brothers and your truly Bahamian outlets. 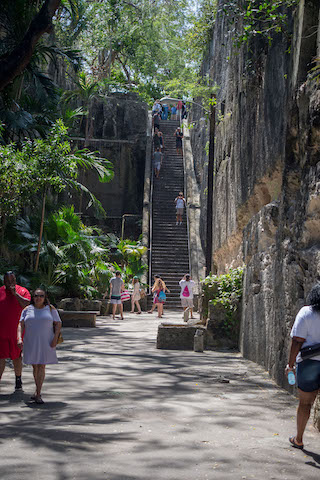 Bahamian Brewery & Beverage Company Limited introduced a new beer to its collection, this one an ode to one of the country’s most significant monuments: The Queen's Staircase also known as the 66 steps. (Photograph courtesy of BBB for Barefoot Marketing) 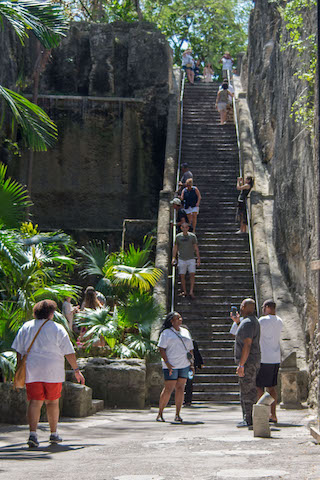