Touring Lighthouse Pointe and Memories were among the list of things on agenda of Prime Minister, Dr. the Hon. Hubert Minnis, while on island on Friday, October 27.

Accompanied by Minister of State in the Office of the Prime Minister, Grand Bahama, Senator the Hon. Kwasi Thompson, the Prime Minister was taken on a tour of the property by general manager, Veronica Clarke and Graham Torode of Hutchison Lucaya Ltd.

Following the tour of the hotel property, Prime Minister Minnis said that having spoken with the vendors, their greatest concern was the fact that there were very few visitors and as a result, their revenue impacting their ability to pay their mortgage, light and other utilities. Others impacted by the low numbers of visitors are also bus and taxi drivers.

“And what was most important, they (the vendors) said the pivotal instrument to their survival was the hotel and that was why the government had to put forth a proposal to purchase the hotel. Because we think it’s essential to save the economy of Grand Bahama.”

Before purchasing the hotel, the nation’s leader said it was important to tour the facility. While at Memories, the group saw one of the restaurants and a few of the hotel rooms.

Memories, which has 400 rooms, is in what he described as “in very good condition” with minimal damage needing minimal repairs to get it up and running. “That will have great impact on the survival of the marketplace, the bus tours, the taxis and Grand Bahama…. So I think we’ll concentrate on that.”

With a commitment from Grand Celebration to resume sailing between Grand Bahama and West Palm Beach in December, and in 2018, Celebration will be adding an additional vessel -- it is important, noted the Prime Minister, that the rooms are available to accommodate the cruise line.

“We are going to concentrate on Memories and Lighthouse so that we will have room inventory of approximately 700 rooms, and we think that will suffice at this particular time.” In addition to other initiatives the government is currently looking into, the room inventory will keep the island’s economy functioning.

He said, “the most important thing is to save that instrument which is most pivotal to the survival of Grand Bahama.”

A proposal has been submitted to the owners, they have responded and so the matter is now in the hands of the attorneys, and according to Prime Minister Minnis, it is hoped that something is worked out as soon as possible. Referring to Memories he added, “that hotel would be functional very soon. Breakers Cay will take more work, however, we’ll still have an inventory of 700 rooms which would suffice for Celebration and whomever we enter lease arrangements with in terms of bringing in the guests.”

Grand Bahama, he said, has been suffering since the early 90s and he is concerned with relieving that as quickly as possible. 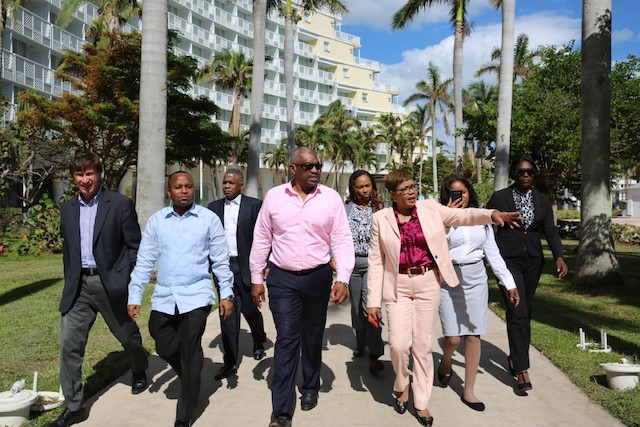 TOURING THE HOTEL PROPERTY – While in Grand Bahama on Friday, October 27, Prime Minister, Dr. the Hon. Hubert Minnis, toured Grand Lucayan and Memories hotel properties. The government has submitted a proposal to Hutchison, the hotel owners, to purchase the properties so that they can be opened as soon as possible. Shown during the tour (front, from left): Graham Torode, Hutchison Lucaya Ltd.; Senator the Hon. Kwasi Thompson, Minister of State in the Office of the Prime Minister, Grand Bahama; Prime Minister Minnis; and Veronica Clarke, general manager, Grand Lucayan. (BIS Photo/Andrew Miller)