Scotiabank is proud to support the 31st Annual Grand Bahama Conchman Triathlon set for this Saturday, November 4 at Taino Beach.

“At Scotiabank, we are committed to helping young persons in our community become better off. We are happy to partner with Conchman as the exclusive sponsor of the run discipline of this year’s triathlon.” said Bruno Styles, Manager, Scotiabank Freeport.

The Bank was pleased with its sponsorship of the Conchman event in 2016, and particularly the success of the inaugural Schools Competition driven by Scotiabank’s’ global community investment strategy which focuses on youth.

“I am delighted to have Scotiabank as the Run Event Sponsor,” said Christopher Baker, Conchman Chairman. “Five schools in Grand Bahama took part last year with 15 teams participating. We expect even more schools to participate this year with additional teams, such was the enthusiasm of those who took part.”

“Today’s youth become tomorrow’s leaders. We know that focusing on young people is an investment in the long-term security, stability and growth of both our communities and our business,” said Nakera Symonette, Senior Manager of Marketing and Public Relations. “Therefore we are pleased, not only with the expected youth participation in the 31st Annual Conchman, but also with the selected beneficiaries of this year’s Triathlon,” Symonette continued.

According to Styles, Conchman is one of many other worthwhile initiatives throughout Grand Bahama that Scotiabank supports. He cited some the Bank’s recent community investments on the island, “Scotiabank hosts an annual Kids Community Fun Day that celebrates children each summer. In 2016, we funded a $25K TuneIn to Reading lab at Freeport Primary School.”

About Conchman
The 31st annual Conchman Triathlon takes place on November 4 at Taino Beach, the third venue in its illustrious history.

More than 160 people competed in the first event in 1986 and since then, the Conchman has been truly established in the international athletic calendar with thousands of competitors traveling from as far away as Europe and the west coast of the United States. The event’s objectives have remained the same from the start – to stage a positive community event that could contribute to the island’s charitable organizations – and this mission will continue. For more information, www.conchmantriathlon.com.

About Scotiabank
At Scotiabank, we aim to support organizations that are committed to helping young people reach their full potential. Young people are our future leaders and Scotiabank's goal is to help ensure that they have the necessary skills and resources they need to support their success. Together with our employees, the Bank supports causes at a grassroots level. Recognized as a leader for our charitable donations and philanthropic activities, in 2016, Scotiabank contributed more than $70 million to help our communities around the world.

Scotiabank is Canada's international bank and a leading financial services provider in North America, Latin America, the Caribbean and Central America, and Asia-Pacific. We are dedicated to helping our 24 million customers become better off through a broad range of advice, products and services, including personal and commercial banking, wealth management and private banking, corporate and investment banking, and capital markets. With a team of more than 88,000 employees and assets of over $906 billion (as at July 31, 2017), Scotiabank trades on the Toronto (TSX: BNS) and New York Exchanges (NYSE: BNS). For more information, please visit www.scotiabank.com and follow us on Twitter @ScotiabankViews. 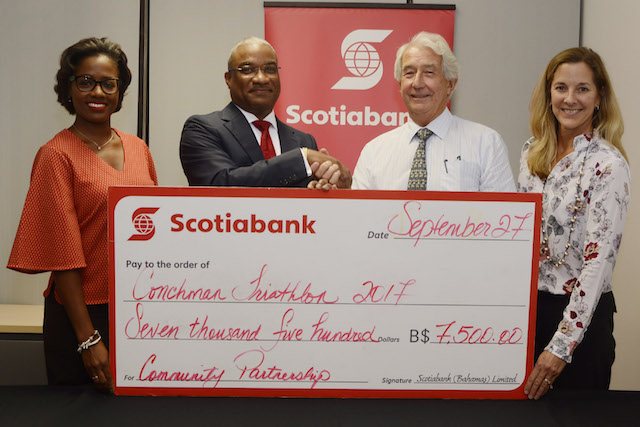