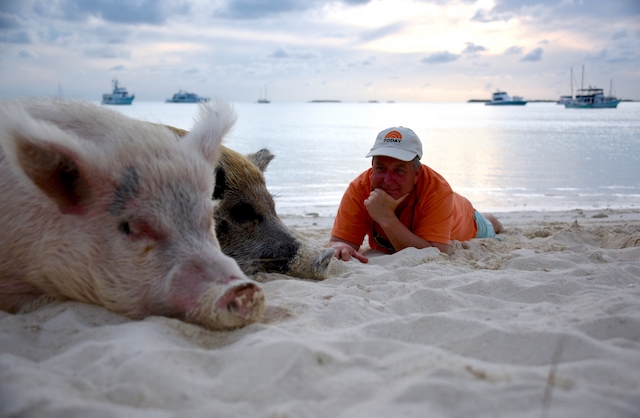 Break time -- NBC’s Kerry Sanders takes a closer look at the amazing swimming pigs of Exuma. His report on the Today show included snippets from When Pigs Swim. This exposure, along with footage used by The Bachelor, Pop Sugar and many others, has put the number of viewers of the 15-minute film into the tens of millions, while 1.43 million have viewed the 5-minute teaser video online. Photo by Charlie Smith/Earthbeat Films.

Three years ago when Canadian author and communications specialist Jeff Todd and Bahamian filmmaker Charlie Smith,now based in the U.S., talked about getting together to make a film about the amazing swimming pigs of Exuma, the two friends figured it would be fun to film and might draw a little more attention to Exuma where they both had connections.

“We never dreamed one little video would do what it’s done,” said Todd this week after seeing the numbers of viewers. “The video called When Pigs Swim has been viewed more than 1.43 million times by unique viewers and if you include viewers who have seen pieces of it on shows like Today and The Bachelor, the numbers swell to tens if not hundreds of millions.”

Smith, who once hosted a popular show on local Bahamian TV called Electric Air, was there when NBC’s Kerry Sanders arrived in Staniel Cay, Exuma with full film crew to do the piece for the Today show that ran in June 2016.

“The pigs are so used to people they pay no attention which makes it all that much more natural,” said Smith, now based mostly in Miami. “There are various versions of the story of how the pigs got here but one thing we do know for sure -- once they were here on an otherwise empty piece of waterfront land, they did what any smart animal would do. They went in the water.”

They also procreated. While there have been concerns, especially after several pigs were found dead earlier this year, the population seems to be stable. And so does the interest.

Visitors keep coming. The Bahamas Ministry of Tourism is in the process of establishing regulations and animal rights activists worry that the number of people who swarm the animals for swimming with the pigs’ selfies is putting too much pressure on them.

“People, especially in Europe, can’t get enough of the swimming pigs. In the UK, if you mention Bahamas today, it’s not like the old days of someone saying ‘Oh, the beautiful beaches.’ Now it’s ‘I have to see the swimming pigs’.

It’s been great for tour operators coming out of Nassau as well as those in Exuma and it’s helped fill hotel rooms, for sure,” says Todd, who serves as director of communications for a company and foundation that owns a share of the ultra-luxury Grand Isle Resort in Emerald Bay.

It was the owner of that company, Canadian Peter Nicholson, who produced and funded the film. Over the past year, the condo-hotel has reported the highest occupancy levels in its history and Todd thinks the pigs are a big reason why.

“We aren’t alone. If you ask any hotelier in Exuma right now, they will say business is booming. And the one thing you can’t miss in Exuma is the swimming pigs.”

“What makes the film so much fun,” he adds, “is the element of surprise. It starts out with this calm, clear, tranquil water and soothing music and then suddenly you are at Big Major Cay and there are pigs in the water swimming staring at you like ‘What are you doing in my space?’ and you are so startled that you can’t help but laugh. And then you can picture yourself swimming alongside them.

Life needs a little humour and something that makes us not take ourselves too seriously and I think that’s what the swimming pigs do for us. They put us in our place in the universe.” 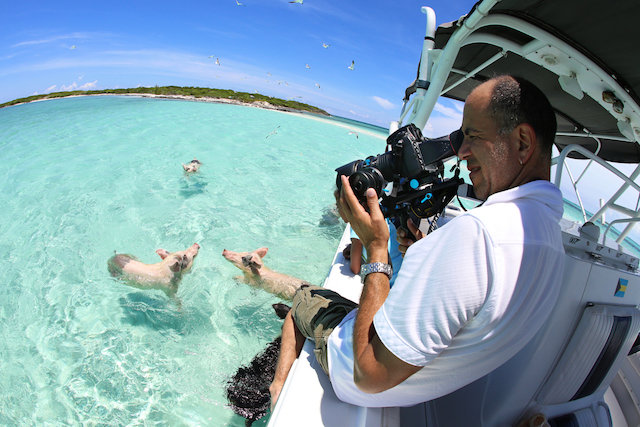 Filmmaker Charlie Smith, Earthbeat Films, captures the swimming pigs of Exuma for the video When Pigs Swim produced by Peter Nicholson, an investor in Grand Isle Villas, Emerald Bay, and a supporter of Exuma-related activities, including Run for Pompey. The 5-minute online teaser video has been seen tens of millions of times and this week hit 1.43 unique viewers. Photo by Howie Sonnenschein. 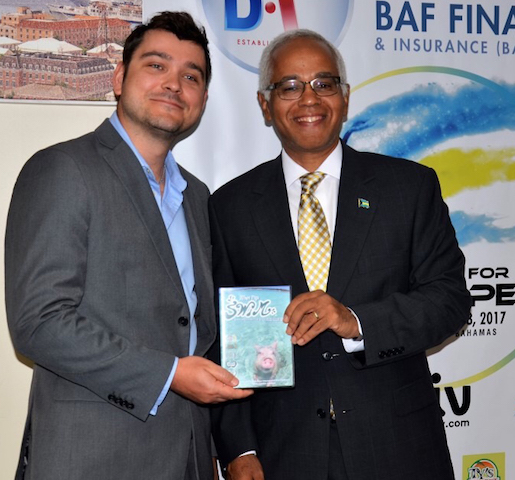 When Pigs Swim video presentatin to Tourism Minister
Author and communications specialist Jeff Todd presents a copy of When Pigs Swim, the video about the phenomenon driving thousands of visitors to Exuma, to Minister of Tourism Dionisio D’Aguilar. Excerpts from the video have been shown on the Today show, The Bachelor, in Pop Sugar and will be featured in an upcoming issue of Southern Boating magazine.