Odyssey Aviation, the premier Fixed Based Operation (FBO) in the Bahamas, recently signed a contract with Island Industries (Bahamas) Limited, distributers of Butler building systems in the Bahamas since 1968, for the construction of Odyssey’s new hangar.

The hangar features 200’ clearspan allowing wide open interior hangar space to accommodate their clients aircraft. A 180’ by 28’ rolling door can be powered closed quickly in inclement weather and is enclosed in pockets when open.

In addition, there will be 3,000 sf of office available to Odysseys’ hangar tenants. The roof will be Butler building system MR24 standing seam roof, the number one choice of roof specifiers.

Odyssey’s CEO Steven K. Kelly said “when it was time to select a builder for our new state of the art hangar, Island Industries was the wise choice with a Butler building erected by their own experienced, all Bahamian crew.

Island Industries has the most experience with large clearspan metal buildings in the Bahamas so we know we can rely on them to get our hangar built within our budget and without problems”.

Groundwork is underway by BHM, the premier civil works contractor and the site will be ready for the building superstructure in September 2017 with an expected completion by November 2017.

Odyssey Aviation's new hanger and ramp expansion is part of their ongoing commitment to provide the best in aviation services throughout the Bahamas, now with the completed 20,000-sq-ft hangar it will allow the Rubis-branded service provider to shelter more ultra-long-range business jets. 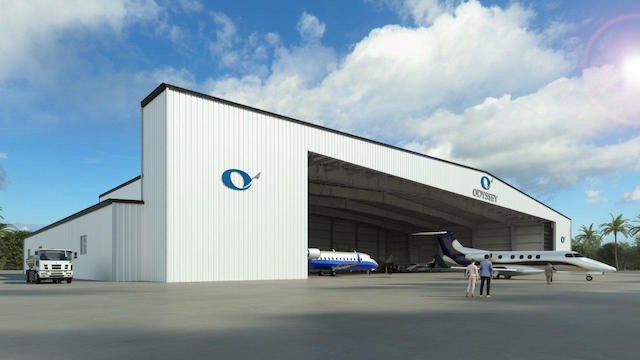 This will be Odyssey’s second hangar, and when completed will increase the total hangar space to approximately 50,000 square feet. Both hangars will handle up to and including the new Gulfstream G650.

In addition an extra 60,000-sqft expansion of its lighted ramp, bringing the total footprint to more than 600,000-sq-ft, almost double the size of any FBO at Nassau’s Lynden Pindling International Airport (LPIA).

LPIA tops the list of the busiest airports in the Caribbean and consistently falls in the top 20 in the world. Odyssey Aviation Nassau has the only private property on the field and handles the highest amount of general aviation traffic. The added space will create room to park 20 to 25 more aircraft which will significantly aid in the flow of traffic during peak season.

Michael Donald, President of Island Industries, says it is a privilege working with Odyssey on the construction of such a prestigious project, a new landmark for LPIA.