Dolphin Encounters is one of the top tourist attractions in the Bahamas and is owned and operated by a local family. It began in 1989 when two Atlantic Bottlenose dolphins were rescued from an aquarium that closed in Nassau. The animals were relocated to a large all-natural seawater dolphin habitat on Treasure Island (a.k.a. Great Guana Cay) Abaco, Bahamas.

During its short history, Dolphin Encounters has transformed itself from a dolphin rescue project with two dolphins and three employees to one of Nassau's foremost tourist attractions with eighteen dolphins, six sea lions and over 150 dedicated staff. Our natural seawater lagoon has facilitated many successful births, including three calves by our oldest female Princess, one of the original dolphins.

Soon after, six more dolphins joined our marine mammal family which created the foundation of what is today known as Dolphin Encounters. 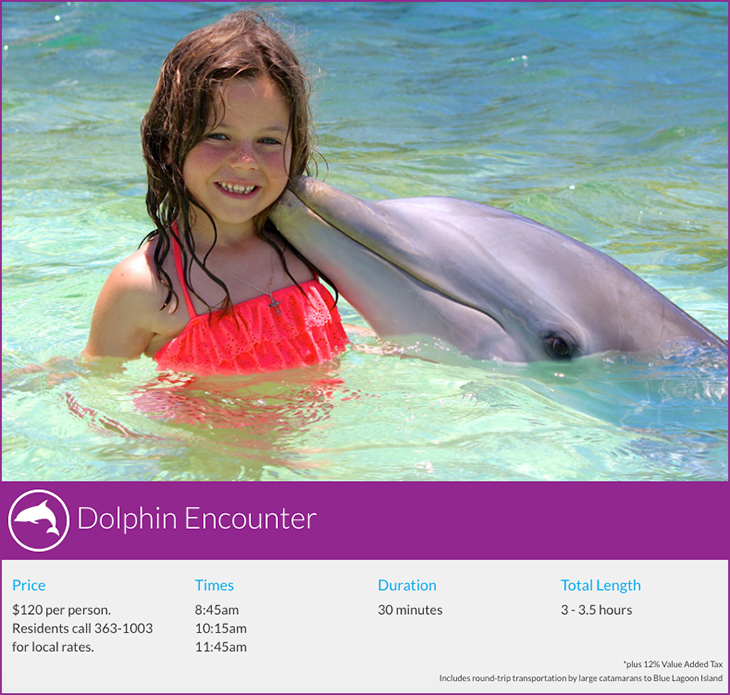 Click here to view the complete brochure
View our brochure for more information on how you can enjoy all our exciting programs.
A bit of history...

In 1996, Dolphin Encounters was chosen by Universal Studios to work on the movie "Flipper" starring Paul Hogan and Elijah Wood. The company provided three dolphins - to play the famous aquatic star. Dolphin Encounters was also involved in the making of several well-known commercials for companies such as Sony, and Visa as well as several music videos. Some of our dolphins also starred in the Mary Kate & Ashley adventure film, "Holiday in the Sun." Chances are you have also seen the dolphins of Blue Lagoon Island. They have been featured on CBS, NBC, E!, CNN, ESPN, MTV, QVC, Nickelodeon, Oxygen, many local ABC, NBC, and CBS affiliates , the BBC, SKY News, VOX TV and many other international television and radio shows and networks, magazines and newspapers.

A few of our sea lions are also celebrities and have starred as the lead in the movies "Andre", "Slappy and the Stinkers", and various commercials and magazine shoots.

The facility offers a multitude of special education and marine conservation programs to local schools and underprivileged children. Dolphin Encounters has made the lifetime dream of many terminally ill children come true by participating in the Make-A-Wish Foundation and other similar organizations. Our facility also participates in research programs involving our dolphins and dolphins in the wild to help scientists learn more about marine mammals.


Experience the real Bahamas
Over two million visitors from around the world have participated in our dolphin programs. Dolphin Encounters provides this rare opportunity in a safe environment with an emphasis on education and entertainment. Our main objective is to let guests interactively experience dolphins and sea lions to heighten their awareness and understanding of these truly magnificent animals and similar species. Come visit us on magnificent Blue Lagoon Island or just learn more about the marine environment and the marine mammals under our care through our Education pages.

Reviews and ratings (Showing Latest 2 of 2) show all